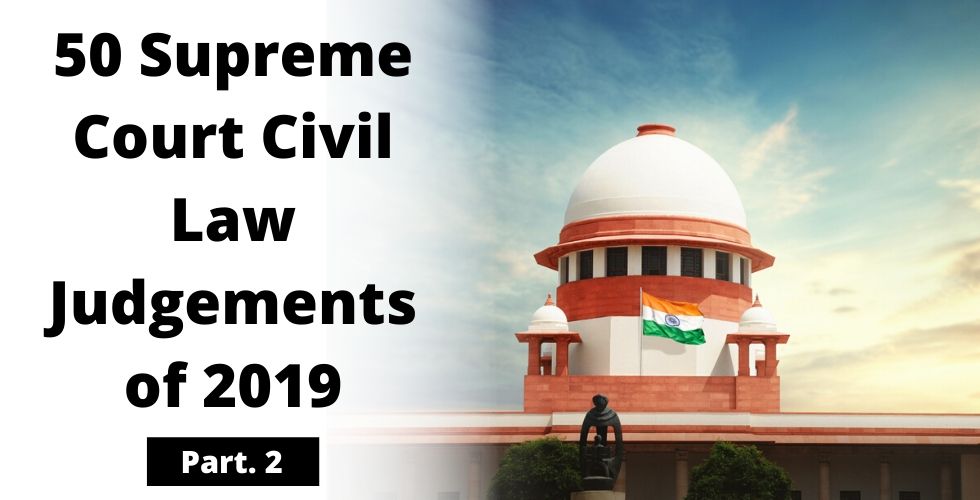 18. Property Inherited By A Male Will Remain As Coparcenary Property For Descendants Up To Three Degrees Below Him Would Get An Equal Rights As Coparceners – Mitakshara Law

Supreme Court held the rule under Mitakshara Law that whenever a male ancestor inherits any property from any of his parental ancestors up to 3 degrees above him, then his male legal heirs up to three degrees below him would get equal rights as coparceners in that property will apply in cases of succession which opened under Hindu Succession Act, 1956.

The bench of Justices UU Lalit and Indu Malhotra by applying this rule allowed an appeal filed by Arshnoor Singh to set aside the sale deeds executed by his father Dharam Singh in 1999. As per impugned sale deeds, Dharam Singh alienated joint family property to the respondent, whom he subsequently married as Second Wife.

The Supreme Court held that property inherited from father by sons becomes joint family property in the hands of sons. The bench of Justices AM Khanwilkar and Ajay Rastogi rendered this decision.

The bench of Justices L Nageswara Rao and Hemant Gupta was dealing with this appeal from Gujarat High Court.

(Case - GovindBhai ChottaBhai Patel and ors. vs. Patel Ramanbhai Mathurbhai, Civil Appeal Number- 7528/2019 and the case was decided on 25 September ’19)

The Supreme Court has found fault with the judgment of Haryana and Punjab High Court, which held that a decree for specific performance to be in executable as the balance sale consideration was deposited by the plaintiff after the appeal, beyond the period fixed by the trial court.

The bench of Justice DY Chandrachaud And Justice Indira Banerjee held that the court’s decree had merged with the appeal court’s decree. Hence, on the part of the plaintiff, there was no delay in depositing the balance sale consideration.

22. Plaint Can Be Rejected As A Whole Or Not At All: Order Vii Rule 11(D) Code Of Civil Procedure

Plaint can either be rejected as a whole or not at all, said the Supreme Court while reiterating that it is not permissible to reject a plaint qua any particular portion of the plaint, including against some of the defendants and continue the same against others.

“If the plaint survives against certain defendants and or properties, Order VII Rule 11 (d) of Code of Civil Procedure will have no application at all, and the suit as a whole must then proceed to trial” bench observed.

23. It Is Not Necessary To File A Copy Of The Decree Along With Execution Application

24. Cross Objection Should Be Disposed Of On Its Merits With Reason Notwithstanding Dismissal Of Appeal.

The Supreme Court held that cross objection has to be disposed of on its merits by assigning reasons notwithstanding the dismissal of the appeal.

The bench observed that “Rejection of cross objection without any discussion and reason cannot be countenanced.”

25. Plaintiff Cannot Be Forced To Add Parties Against Whom He Doesn’t Want To File The Suit.

The Supreme Court held that the plaintiff is the dominus litis and can’t be forced to add parties against whom he doesn’t want to fight unless there is a compulsion of the rule of law.

26. Compromise Decree In Representative Suit Void If Obtained Without Leave Of The Court And Notice To The Parties Interested.

The Supreme Court has observed that a compromise decree in a representative suit obtained without the leave of the court and without issuing notice to the interested parties would be void.

27. Cross Objection Filings By Defendants Not Necessary To Dispute Adverse Findings In The Dismissed Suit.

The Supreme Court has observed that it is not necessary that defendants should file a cross objection to the appeal against the dismissal of a suit to dispute adverse findings in the judgment appealed against.

28. Second Appeal Not To Be Dismissed Only On The Ground Of ‘concurrent Findings’

The Supreme Court held that a High Court could not dismiss a second appeal merely on the ground that there are concurrent findings of two courts, and thus such findings become unassailable.

29. Plaint Can Be Rejected When It Does Not Disclose Clear Right To Sue: Order VII Rule 11 Code Of Civil Procedure.

The Supreme Court that a plaint can be rejected under Order VII Rule 11 of Code of Civil Procedure when it is manifestly vexatious, groundless, and meritless in the sense that it doesn’t disclose a clear Right to Sue.

The bench of Justices Mohan M. Shantanagoudar and Sanjiv Khanna also observed that a mere contemplation or possibility that a Right may be infringed without any legitimate basis for that Right would not be sufficient to hold that the plaint discloses a cause of action.

30. Decree Against Plaintiff By Default Bars Fresh Suit On Same Cause Of Action By Successor In Title. – Order IX Rule 9 Code Of Civil Procedure

The Supreme Court has held that the decree against the plaintiff by default bars fresh suit on the same cause of action by their successors in title.

The bench of Justices Arun Mishra and MR Shah set aside a High Court order on the ground that in the previous suit filed by the vendors of the plaintiff, similar relief was prayed. The said suit was dismissed under the provisions of Order IX Rule 8 of the Code of Civil Procedure as the counsel for defendants was present, and the plaintiff was absent.

31. Executing Court Cannot Travel Beyond The Decree Or Order Beyond Execution.

The Supreme Court has observed that a settled proposition that an executing court cannot travel beyond decree or order under Execution.

32. Question Of Limitation Cannot Be Decided As A Preliminary Issue – Section 9 (A)Code Of Civil Procedure( Maharashtra).

The Supreme Court has held that under Section 9A of CPC applicable in the State of Maharashtra, the question of limitation cannot be decided as a preliminary issue.

The bench of Justices Arun Mishra, MR Shah, and BR Gavai observed that under the provision of Section 9 A and order XIV Rule 2, it is open to decide preliminary issues if it is purely a question of law and not a mixed question of law and fact by recording evidence.

33. Should Proceedings In New Court Where Returned Plaint Is Filed Be Started De Novo Or From Such Stage At Which The Plaint Was Ordered To Be Returned.

After a plaint is returned in terms of order VII Rule 10 and Rule 10A Code of Civil Procedure, should Proceedings in new Court where returned plaint is filed be started De Novo? The Supreme Court has referred this issue to a larger bench.

In MS Excel Careers & another v. Frankfinn Aviation Services Pvt. Ltd., Bench of Justices Dipak Mishra and Aniruddha Bose made this reference after it noticed an apparent conflict between the judgment in Joginder Tuli v. S.L. Bhatia and Oil and Natural Gas Corporation v. Modern Construction.

34. Entirety Of Averments Of Plaint Has To Be Taken Into Account While Considering A Plea Seeking Rejection Of Plaint.

The Supreme Court held that the entirety of Plaint averments have to be taken into account while considering a plea seeking rejection of the plaint.