Landlord Tenant-relationship Would Not Terminate By Mere Agreement To Sell The Leased Property To Tenant. 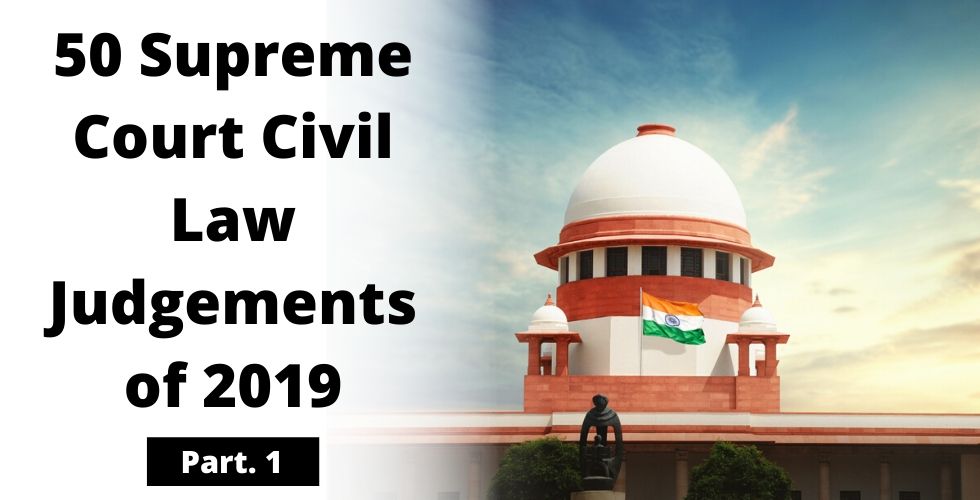 1. Landlord Tenant-relationship Would Not Terminate By Mere Agreement To Sell The Leased Property To Tenant.

The Supreme Court held that mere agreement to sell the property of landlord to the tenant would not result in termination of the landlord-tenant relationship between both the parties unless there is a stipulation in the agreement itself to that effect.

2. Undivided Share In Joint Family Can Be Disposed Of By Will As Per Section 30 Of The Hindu Succession Act.

The Supreme Court held while dismissing appeals from partition suit that the undivided interest of a Hindu in a joint family property can be disposed of by a will as per section 30 of Hindu Succession Act,1956.

The bench of Justices AM Khanwilkar and Ajay Rastogi observed in the case “ Section 30 of the Act, permits the disposition by way of the will of a male Hindu in a Mitakshara Coparcenary property.”

3. Decree Passed On Plaintiff’s Evidence Without Appearance Of Defendant At Trial Is Ex- Parte Decree.

The Supreme Court held that a decree passed after taking plaintiff’s without the appearance of the defendant at the trial stage, is an Ex- parte decree which could be set aside under order XI Rule 13 of the Code of Civil Procedure (CPC).

The bench of Justices AM Sapre and Dinesh Maheshwari passed the order in the case which was an appeal against a high court judgment, which set aside a preliminary decree under Order IX Rule 13 Code Of Civil Procedure.

4. Irregularity In Report Of Local Commissioner Is Not A Ground To Dismiss The Suit.

The Supreme Court has observed that a civil suit could not be dismissed merely for some irregularity in the Local Commissioner’s Report appointed for local investigation.

The issue before the Supreme Court in the case (Ram Lal v. Salig Ram) was that whether it is justified or not in setting aside the decree of First Appellate Court on the ground that the Local Commissioner had not carried out demarcation by the application instructions.

The bench of Justices AM sapre, Dinesh Maheshwari observed that the Local commissioner omitted to precisely follow the applicable instructions for carrying out such demarcation and notably excluded to fix three reference points on different sides of land in question. But the court disapproved the dismissal of the suit by the HC and Observed that where the court is dissatisfied with the proceedings of such a Local commissioner, it could direct such further inquiry to be made as considered fit.

5. Second Appeal: Obligatory For High Court To Form Substantial Question Of Law Even If Findings Of Lower Courts Are Perverse Per Se

The court observed in the case (Sreedevi v. Sarjoram) that it is obligatory for a High Court while considering a Second Appeal to form a substantial question of law in the second appeal even if lower court’s findings are perverse per se.

A bench comprising of Justice AM Khanwilkar and Justice Ajay Rastogi set aside a Kerala High Court order on the ground that it decided the Second Appeal without formulating a substantial question of law.

6. Revenue Record Entries Can Be Challenged On The Ground That It Was Made Surreptitiously Or Fraudulently.

The Supreme Court observed that the entries in the revenue records could be challenged on the ground that it was made secretly or fraudulently.

7. Suit Related To Properties Situated In Jurisdiction Of Different Courts Can Be Instituted In One Of Those Courts.

The Supreme Court has observed that a lawsuit related to immovable property or properties situated in the jurisdiction of different courts may be instituted in any courts within whose local limits of jurisdiction any portion of the property or one or more properties may be situated.

The bench of Justice Amit Bhushan and Justice KM Joseph observed that the interpretation of word “Portion of the Property” in Section 17 of Code of Civil Procedure (CPC) could not only be understood in a limited and restrictive sense of being the portion of one property situated in the jurisdiction of two courts.

8. Plaintiff Has To Prove His Actual Possession On The Date Of Filing The Suit: Section 38 Of The Specific Relief Act

The Supreme Court has observed that in a suit filed under Section 38 of the Specific Relief Act, 1963 permanent injunction can be granted only to a person who is in actual possession of the property on the date of suit.

(Case - Bal Krishna Dattatraya Galande vs. Bal Krishna Rambharose Gupta and another, Civil Appeal number 1509/2019 and the case was decided on 6 February ’19)

9. Liberty Granted By Court To Pursue Appropriate Remedy Does Not Bar Application Of Principle Of Constructive Res Judicata

The Supreme Court has observed that liberty granted by the court to avail ‘appropriate remedies’ to a party does not bar the application of constructive Res Judicata when he/ she invokes such a remedy.

10. Revision Petition Not Maintainable Against Interlocutory Orders: Section 115 Of Code Of Civil Procedure

The Supreme Court has observed that revision petitions filed under Section 115 of the Code of Civil Procedure are not maintainable against interlocutory orders.

The bench comprising of Justice Rohinton Fali Nariman and Justice Vineet Saran described the impugned judgment in the appeal which allowed a revision petition against an interlocutory order as ‘we are constraint to observed that every legal canon has been thrown to the winds’.

11. Transfer By Erroneous Representation Of Title Will Hold Good If Transferor Acquires Title Later – Section 43 Of Transfer Of Property Act

Applying the principle of 'feeding the grant by estoppel' under section 43 of the TP Act, the Supreme Court granted relief to a party who was misled to purchase a property by the erroneous representation of title by the vendor.

12. Is Amendment Of Pleadings Allowed After Commencement Of Trial?

The Supreme Court in a Judgement explained when and on what considerations an applications for amendment of pleadings filed after commencement of trial, can be allowed.

The bench of Justice Ramana and Justice Mohan M. Shantanagoudar observed that while dealing with such an application, the courts have to consider whether it is bonafide or malafide and whether it causes such prejudice to the other side which cannot be compensated adequately in terms of money.

13. Sale Of Minor's Property By Guardian Can Be Avoided Only By Filing Suit To Set Aside Deed Within Period Of Limitation Under Section 60 Of The Limitation Act.

The Court held that the sale of a minor's property by a guardian could be avoided only by filing suit to set aside the lawsuit within the period of limitation prescribed under section 60 of the Limitation Act, 1963 which is three years from the date of attaining majority by the minor.

The case the minor has died before attaining majority, as it happened in the case before the Supreme Court, the legal representatives of the minor should bring the suit within three years from the date on which the minor would have attained majority.

The bench of Justices Ashok Bhushan and KM Joseph was dealing with an appeal by the plaintiffs in a suit for declaration of title and possession of the immovable property. In the case, the plaintiffs omitted to seek the prayer for setting aside the sale deeds, which turned fatal to the case.

14. When Can Transposition Of Defendants As Plaintiffs Be Permitted Under Rule 1(A) Of Order XXIII CPC?

The Supreme Court has examined the scope of Rule 1(A) of order XXIII Code of Civil Procedure which deals with the power of a court to permit transposition of defendants as to plaintiff.

The bench of Justice Uday Umesh Lalit and Justice Dinesh Maheshwari observed that, if the plaintiff is seeking to withdraw or abandon his claim under Rule 1 of Order XXIII CPC and the defendant seeking the transposition is having an interest in the subject matter of the suit and thereby, a substantial question to be adjudicated against the other defendant. The defendants can be transposed as plaintiffs.

15. Plaint Can Be Rejected If Law Of Limitation Clearly bars the suit.

16. Preferential Rights Of Heirs Is Also Applicable To Agricultural Lands Under Section 22 Of The Hindi Succession Act, 2005

Section 22 says that when interest in any immovable property of an intestate devolves upon two or more heirs, and anyone of such heir proposes to transfer his or her interest in the property or business, the other heirs shall have preferential right to acquire the interest proposed to be transferred.

The Supreme Court has held that the preferential right given to an heir of a Hindu under section 22 of the act is applicable even if the property in question is agricultural land.

The bench of Justice Uday Umesh Lalit and Justice M R Shah observed that a matter relating to succession to an interest in agricultural lands is occupied only by Section 22 of the Hindu Succession Act insofar as the state of Himachal Pradesh is concerned. It is also noted that with the deletion of Section 4(2) of the act, now there is no exception to the applicability of Section 22 of the act. Section 4(2) says that provisions of the act would not apply in the cases interalia of devolution of tendency rights in respect of agricultural holdings.

The Supreme Court explained that the correct test in a case falling under Order II Rule 2 CPC is “Whether the claim in the new suit is founded upon the cause of action distinct from that which was the foundation for the former suit.“