Section 144 Cr.P.C. – What are the Grounds to Impose Restrictions?

Section 144 of the Criminal Procedure Code, 1973 gives power to a District Magistrate, Sub-Divisional Magistrate or any other Executive Magistrate on behalf of the state government to issue an order to an individual or general public in particular place or area to “abstain from a certain act” or “to make certain order related to some property in his possession or under his management.” 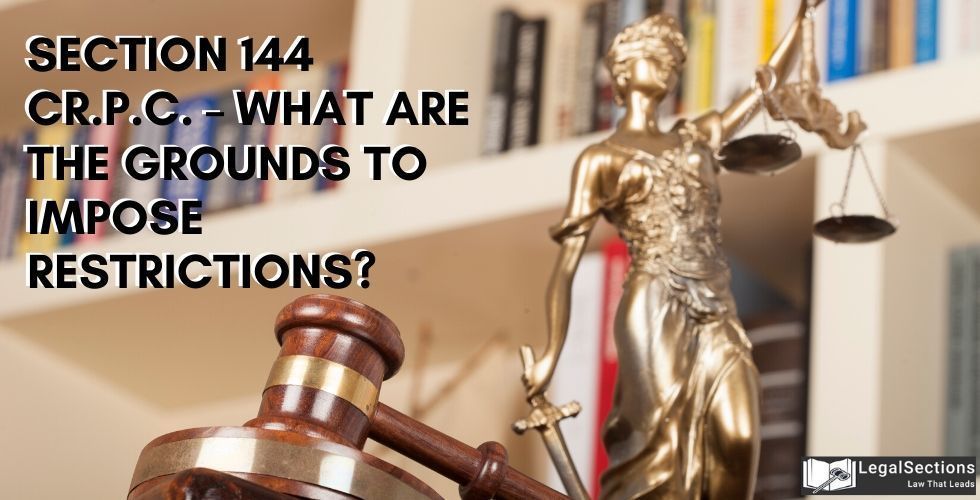 Section 144 of the Criminal Procedure Code, 1973 gives power to a District Magistrate, Sub-Divisional Magistrate or any other Executive Magistrate on behalf of the state government to issue an order to an individual or general public in particular place or area to “abstain from a certain act” or “to make certain order related to some property in his possession or under his management.”

As per section 144 of Cr.P.C., the order can be passed only if such magistrate considers that the direction is likely to prevent-

This order can be passed against a particular person, the general public, or even ex- parte.

So, the power under Section 144 of Cr.P.C can be exercised by the Executive Officer on a mere subjective satisfaction regarding the likelihood of danger?

Before knowing the answer to this question, one needs to be kept in mind that the order under this provision will lead to the infringement of fundamental rights of Freedom Of Speech And Expression, assembly and movement guaranteed under Article 19(1)(a), (b) and (c) of the Indian Constitution. Hence, the orders under Section 144 of Cr.P.C have to meet the test of reasonable restrictions as per Article 19 of the Indian Constitution.

In Puttaswamy Case (2017), the Supreme Court laid down a four-fold test to determine proportionality :

So, the legality of the orders passed under Section 144 of the Criminal Procedure Code will be tested based on these principles of ‘reasonableness’ and ‘proportionality.’
Senior Advocate Maneka Guruswami has observed in her research on Freedom to Assemble and to form an association that contradictory approach of Article 19 (1) (b) and (c) of the Constitution and Section 144 of Criminal Procedure Code is a “reflection of a colonial legacy and the unconditional adoption of most of the provisions of the 1872 Cr.P.C by the contemporary Indian State”.

Mere likelihood of danger, not a ground to invoke Section 144 Cr.P.C.

As held by the Supreme Court, mere apprehension of danger is not a sufficient ground to curb citizens right by invoking Section 144 Criminal Procedure Code.
There should be ‘genuine apprehension’ of ‘imminent danger’ and not mere ‘likelihood’ or ‘tendency.’

In Babulal Parate v. State of Maharashtra (1961) Case, the Supreme Court held that the power could be used even in anticipation of danger. But it should be based on sufficient materials that show the immediate prevention of individual acts is necessary to preserve public safety.

The test laid down in section 144 is not mere ‘likelihood’ or ‘tendency.’ The Section says that “the Magistrate must be satisfied that immediate prevention of particular acts is necessary to counterpart danger to public safety etc. The power conferred by the Section is exercisable not only where present danger exists but is also exercisable when there is an apprehension of danger.”

In Madhu Liyame v. SDM (1970), the Supreme Court upheld the constitutionality of Section 144 Cr.P.C on the reasoning that it constituted a reasonable restriction ‘in the interest of the public order.’ However, the Court added that this power should be exercised only in emergent and urgent situations.

“The gist of action under Section 144 is the urgency of the situation, its efficacy in the likelihood of being able to prevent some harmful occurrences. As it is possible to act absolutely and even ex parte, it is obvious that the emergency must be sudden and the consequences sufficiently grave.” The Court also observed in the judgment that “annoyance must assume sufficiently grave proportion to bring the matter within interests of public order (under section 144 of Criminal Procedure Code).

The Supreme Court in Re-Ramlila Maidan Incident Case (2012) said that ‘In case of mere apprehension, without any material facts to indicate that the apprehension is imminent and genuine, it may not be proper for the authorities to place such a restriction upon the rights of the citizens.’

As explained in Re-Ramlila Maidan Incident Case (2012), the necessary prerequisites of the order under Section 144 Cr.P.C. are –

In this case, the Court held that the restriction imposed on the right to freedom of speech and expression was unsupported by cogent reasons and material facts. The Court also held that the police action on protesters to be illegal, after observing that the ‘Police have failed to establish that a situation had arisen where there was imminent need to intervene, having regard to the sensitivity and perniciously perilous consequences that could have resulted if such harsh measures had not to be taken forthwith.’

The Court ordered disciplinary action against erring police officials and compensation to those who have suffered due to the acts of the police.
So, the above decisions, when reading along with the Doctrine of Proportionality, lead to the conclusion that an order under Section 144 Cr.P.C. can be imposed only if there are materials to show:

Further, the restriction must be vital and should be as less invasive as possible, proportionate to the danger. It means, if there are less restrictive means to avoid the threat, they must be acquired.

This means that sweeping orders of Prohibition, passed only with the intention of suppressing public protests are not legally maintainable.

In the case of Shayara Bano vs. Union of India and Superintendent, Central Prison v. Ram Manohar Lohia, Supreme Court held that a state action which is done irrationally, or without adequate determining principle is manifestly arbitrary and also that the State can only impose restrictions on the freedom of speech and expression if it indicates a close link between speech and public order and the liability is on the state discharge burden of proof along with evidence.

On 10 January 2019, the ruling came on hearing of a plea in connection with Internet blockage in Jammu and Kashmir Supreme Court said ‘that the power under Section 144 Criminal Procedure Code (Cr.P.C.) cannot be used as a tool to prevent the legitimate expression of opinion or grievance or exercise of any democratic rights. Our Constitution protects the expression of divergent views, legitimate expressions, and disapproval, and this cannot be the basis for invocation of Section 144 Cr.P.C. unless there is a sufficient material to show that there is likely to be an incitement to violence or threat to public safety or danger.’

The Court held that while passing such an order, the Magistrate cannot apply the straitjacket formula without assessing the gravity of the prevailing circumstances.

The Supreme Court also held that, If orders under Section 144 are passed in a casual and cavalier manner, it will result in severe illegality.