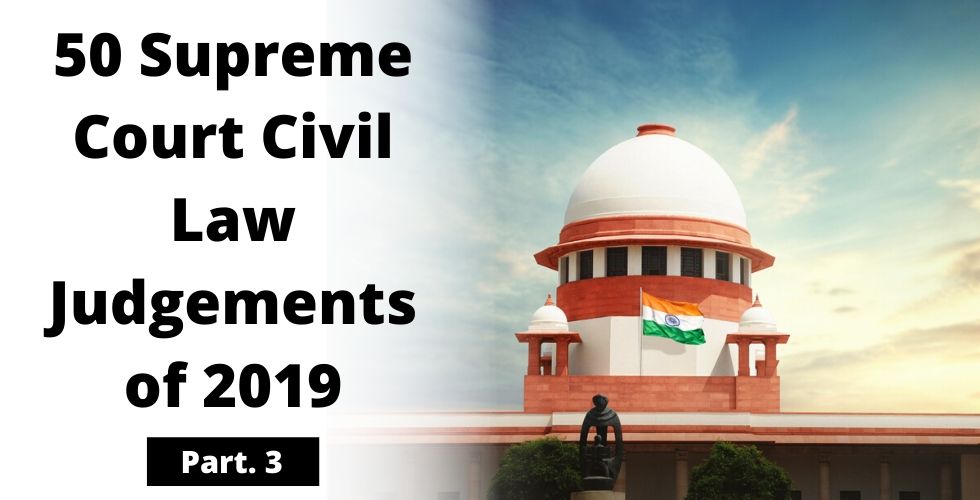 35. Mere Extension Of Time For Deposit Of Balance Sale Consideration Will Not Absolve Plaintiff Of Obligation To Prove Readiness & Willingness – Specific Relief

The Supreme Court held that mere extension of time for deposit of balance sale consideration would not absolve the plaintiff of obligation to prove readiness and willingness to perform his part in a sale agreement.

The bench of Navin Sinha and Indira Banerjee has observed the grant of extension of time cannot ipso facto be constructed as otherwise demonstrating readiness and willingness on the part of the plaintiff.

36. Section 144 Code Of Civil Procedure Not Attracted When There Is No Variation Or Reversal Of A Decree Or Order.

Court has observed that provision of section 144 (Restitution) of the CPC will not be attracted when there is no variation or reversal of a decree or order.

The bench observed that ‘the principle of Doctrine of Restitution is that on the reversal of a decree, the law imposes an obligation on the party to the suit who received the benefit of a decree to make restitution to the other party for what he has lost.’

The Supreme Court held that a court could exercise its discretion and permit the filing of Counter – Claim after the written statement, till the stage of framing of the issues of the trial.

The bench of three judges headed by Justice NV Ramana held that Order VIII Rule 6A of the Code of Civil Procedure does not pose an embargo on filing the counterclaim after filing the written statement.

38. Mere Error In Framing A Substantial Question Of Law Would Not Render A Judgement In the Second Appeal Liable To Be Set Aside

39. Rights Of Succession And Inheritance Of Goan Domicile Shall Be Governed By Portuguese Civil Code

The Supreme Court held that the Rights of succession and inheritance of a Goan Domicile should be governed by the Portuguese Civil Code, 1867, as applicable in the State of Goa.

Justice Deepak Mishra and Justice Aniruddha Bode held that the Rights of Succession and Inheritance, even in respect of properties of a Goan Domicile situation outside Goa, anywhere in India will also be governed by the Portuguese Civil Code,1867.

40. High Court Cannot Dismiss The Second Appeal On Merits When Appellant Is Unrepresented On The Day Fixed For Hearing.

The Supreme Court held that a High Court could not dismiss a second appeal on merits where the appellant is represented on the date fixed for hearing.

By defining the ambit of ‘Accidental Insurance’ Supreme Court held that where a diseased is caused transmitted by insect bite or virus in the natural course of events, it would not be covered by the definition of the accident.

The Supreme Court ordered the razing down of four high rise apartments in Maradu, Kochi, on finding that they were built in violation of CRZ norms as the area comes under CRZ-III.

43. Person Can File Suit To Claim Title By Adverse Possession.

The Supreme Court held that any person who has perfected title by way of adverse possession could maintain a suit for restoration of possession in case of Dispossession.

The bench of Justices Arun Mishra, S. Abdul Nazeer and MR Shah observed that plea of acquisition of title by adverse possession could be taken off by plaintiff under Section 65 of the Limitation Act,1963 and there is no bar under the Act to sue on the aforesaid basis in case of infringement of any rights of the plaintiff.

44. Levy Of Sales Tax Or Service Tax On Supply Of Food And Drinks By Incorporated Clubs

The Supreme Court held that there is no levy of sales tax on the supply of food and drinks by member clubs, whether incorporated and unincorporated to its members.

The bench of Justices R F Nariman, Surya Kant, and Rama Subramanian also held that services given by the incorporated club to its members are exempted from Service tax.

The Supreme Court held that the office of Chief Justice of India is a public authority under the Right to Information Act.

46. Strikes Down The Rules Framed By The Central Government Under Section 184, Finance Act,2017 For Tribunal

5 Judges Bench struck down the Rules already framed by the central government under section 184 and directed the formulation of new rules.

The Supreme Court held that there was no equality between financial creditors and operational creditors. The adjudicating authority cannot substitute the commercial wisdom of CoC. Court also held that the time limit for resolution not to be mandatory. It is open to NCLT to extend the timeline if required.

The constitution bench of Justice Ashok Bhushan and KM Joseph held that Section 29(2) of the Limitation Act could not be pressed in service concerning the filing of suits, appeals, and applications before the Statutory Authorities and tribunals provided in a Special Law or local law.

(Case: Ganesan vs. The Commissioner, The Tamil Nadu Hindu Religious and Charitable Endowments board & others, Civil Appeal Number- 4582/2019, the case was decided on 3 May ’19)

50. Children Born Out Of Void Marriage Are Legitimate, and Compassionate Appointment Cannot Be Denied To Them – Supreme Court

The bench comprising Justice D Y Chandrachaud and Justice M R Shah held that Children born out of void marriage are legitimate and Compassionate Appointment cannot be denied to them.