Can Residential Premises Be Used For Advocate's Office?

An advocate discharges professional services. In no way, the services of an advocate deemed to be termed as commercial since an advocate renders service charges fees. 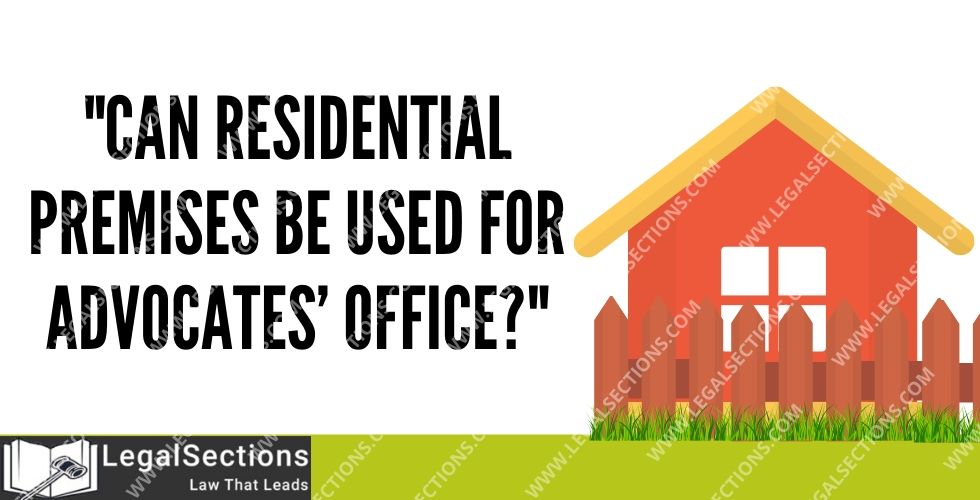 An advocate discharges professional services. In no way, the services of an advocate deemed to be termed as commercial since an advocate renders service charges fees. In contrast, in commercial activity, there is a practice of business, trade, or commerce.

The question whether an advocates office requires registration under the Shops and Establishments Act has been dealt by the Supreme Court in the case of Sasidharan v Peter and Karunakar (AIR 1984 SC 1700) where the Court held that a lawyers office is not a commercial establishment, hence it need not be registered under the above act. An advocate’s office is not a business building. The Supreme Court held that it does not require any strong argument to justify the conclusion that the office of a lawyer or a firm of lawyers is not a ‘shop’.

It is therefore pertinent to note that an advocate can work from his place of residence; however, the same is subject to the local law’s restrictions. Hence, residential premises can be used as offices of an advocate subject to restrictions imposed by local laws. Advocate's office can be operated from a residential place as it is not regarded as a commercial activity. However, it is subject to the space restrictions imposed by the local authorities and laws. The legal profession is not a commercial activity. Instead, it is regarded as a professional activity, which is different from business, trade, or commerce. There are several judgments of the Supreme Court and High Courts which explain this difference. Since the service of an advocate is based on specialized knowledge, experience, and skills, it is treated as a ‘professional service.’

The Division Bench of Madhya Pradesh High Court in Shiv Narayan & another vs. MP Electricity Board and others (AIR 1999 MP 246) observed that classification of the advocate under the heading “Commercial” for payment of consumption of electrical energy at a commercial rate is arbitrary and irrational and ultra vires of Article 14 of Indian Constitution.

You May Be Needed : How to Form a Trust in India

“…in a case of professional activity, a person has to apply his professional skill as against business activity where the transaction is done with the cooperation of employer and his employees for sale of certain goods or services with the profit motive. In the case of the profession, a person works for livelihood and not only for a profit motive”, observed the Madhya Pradesh High Court while explaining the distinction between profession and commerce. This case was appealed before the Supreme Court. The MP Electricity Board relied on the judgment given in New Delhi Municipal Council vs. Sohan Lal Sachdev (dead) rep. by Shmt. Harinder Sachdev [(2002) 2 SCC 494]. In this case, the court held that a building used as a guest house is a commercial establishment observing that if the use is not domestic then it is commercial. The Division Bench of Justices Arijit Pasayat and H K Sema expressed approval of the conclusions of the Madhya Pradesh HC in relation to the applicability of domestic electricity tariff to advocates’ office. “A professional activity must be an activity carried on by a person by his skill and intelligence. There is a fundamental distinction therefore between a professional activity & an activity of a commercial character”, it said.

However, Judges expressed reservations about the observations in Hirinder Sachdev Case that all non-domestic activities are to be treated as a commercial, and the matter was transferred to a larger bench for consideration. The larger Bench of the Supreme Court in the decision made in Civil Appeal No.1065 of 2000, dated 27 October 2005, observed that the issue of whether an advocate was running a commercial activity was not related to the decision in Hirinder Sachdev Case. It held Hirinder Sachdev to be the right decision, as the distinction there was based on statutory definition. The larger Bench also said that it did not go into the question as to whether or not an advocate can be said to be carrying on commercial activity. So, the conclusions of the MP High Court that an advocate’s work is not a commercial activity can be taken as settled by the Apex Court.

A Division Bench of the Rajasthan High Court held in J.V.V.N. Limited and others vs. Smt. Parinitoo Jain and another that an advocate running his office from his residence cannot be charged the additional tariff on a commercial basis. However, if the office is run in an independent commercial place, then the advocate can’t be exempted from the commercial tariff. A distinction has been made between the office in residence and an office at a commercial place.

This was followed in the case of Madras High Court in K.Kanagasabai v The Superintending Engineer. No property tax on advocates’ office as ‘business building’.The Delhi HC, in the case of  BN Magon v South Delhi Municipal Corporation, held that residential premises used by an advocate to run its office would not become a ‘business building’ for property tax. The Court expressed this after noticing that the Master Plan of Delhi 2021 permitted use of residential premises for professional activities of lawyers, doctors, chartered accountants, architects, etc., on condition that professional space should not exceed 50 percent of the permissible FAR for the area.

You May Be Needed: One Person Company formation procedure

In District Bar Association Panchkula v State of Haryana, the Punjab and Haryana High Court quashed the regulations of the Haryana Urban Development Authority, which had prescribed fees for using residential premises allotted by it to use it as an advocate's office. The Haryana Urban Development  Authority had taken the stand; it amounted to a change of residential use to commercial. The HUDA regulation had permitted use of 25 percent of the built-up area for such professional activities. However, the HUDA charged a fee for giving permission for the purpose of residential premises for professional use, which was quashed by the High Court. “We put a query to the senior counsel for Authority that if a well-known author makes a study which he utilizes for writing a book and that is his source of earning, can it be called a non-residential use? There is no satisfactory answer to this question as an activity of a person in the profession of a lawyer is also based on a study of the books and papers for which he maintains the space. It is a noble profession, and in that context, it has been held not to be business or commerce”, the Bench headed by Justice Sanjay Kishan Kaul said. Keeping in mind the nature of the legal profession of an individual lawyer, the use of limited space as prescribed in the Authority Regulations cannot change the character or the activity to commercial, held the Bench.

When the Kerala HC petitioned to take action against allottees of the Kerala State Housing Board who were using their residential premises for commercial purpose, it refused to pass orders against advocate’s offices. However, directions were issued against several other people who were using their space for commercial activities. The HC held that an advocate carrying his office in his residence provided under the scheme could not be said as a commercial activity.

Many local laws concerning building occupancy restrict the space which can be used for professional activity in a residential premise. The Delhi Master Plan referred to in the Magon B case permitted professional activity within 50 percent of the FAR of the residential space. In the case of HUDA Regulation, it was 25 percent of the built-up space. The Kerala Municipal Building Rules state that small professional spaces for architects, doctors, advocates, etc. not exceeding 50 square meter floor area and used as part of the principal residential occupancy are indulged in the group of ‘residential buildings.’ These regulations vary based on local laws.

In Delhi, the Supreme Court in the case of Delhi Pradesh Citizen Council v Union of India (2006) held that professional activities even by architects, CA, doctors and lawyers can not be carried on over 50 percent permissible coverage in residential premises and by anyone who is not a resident in such premises.

The petitioner herein, who is a practicing Lawyer, had set up a Chamber on the ground floor of the multi-storied building where he resides. In the case filed in HC, he objected to the rejection of his application for a new electric connection for his chamber under the “domestic (urban)” category by the CESC Ltd. The CESC, on the other hand, contended that the issue in question didn’t relate to the classification of the premises but, to the use of electricity in premises and the imposition of electricity tariff for the said use.

It was further submitted that the activity of a Lawyer running an office falls under the category of ‘non-domestic’ use. Hence, they had rightly sent a quotation for payment of service charges and security deposit based on a “commercial (urban)” connection. The categorization in the tariff of CESC was limited to two categories: (a) Domestic (Urban) and (b) Commercial (Urban).

Justice Saraf held in the above case, i.e., Kerala State Electricity Board V. Sir Syed Institute of Technical Studies - “The chambers of a litigation lawyer are clearly used for his livelihood, and accordingly, the benefit of the doubt is required to be given to such a petitioner placing him in the category of the “Domestic (Urban).”The Court then accordingly, held that the space being used by the petitioner was an extension of his residence for his legal chamber, placing him in the category of the “Domestic (Urban)”

In conclusion, advocates’ offices can be operated from a residential place, but it is not regarded as a commercial activity. However, it is subjected to the space restrictions imposed by the local laws.