What is the procedure and grounds for filing defamation case?

A person’s reputation is his property. Depending upon the perception of that person, reputation is more important to him than any other property. Reputation is the state of being held in honour and high esteem or the general estimation that the society has for a person. 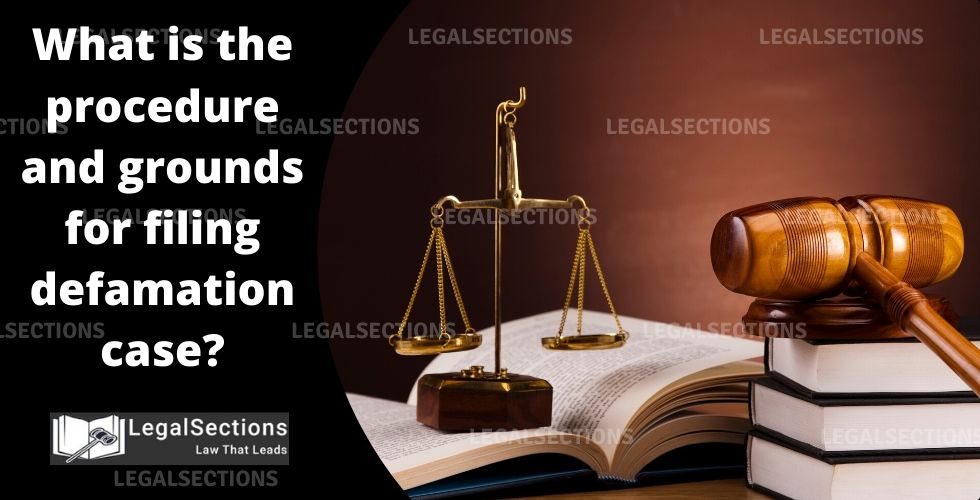 “Every man is entitled to have his reputation preserved inviolately.” – by Jurist Blackstones.

A person’s reputation is his property. Depending upon the perception of that person, reputation is more important to him than any other property. Reputation is the state of being held in honour and high esteem or the general estimation that the society has for a person.

The word defamation is driven from the Latin word ‘Diffamare,’ and it means ‘Spreading evil report about someone.’ Thus, defamation is nothing but causing damage to the reputation of a person.

According to Salmond, ‘the wrong of defamation lies in the publication of a false and defamatory statement about another person without lawful justification.’

Winfield defines the concept as “defamation is the publication of a statement which tends to lower a person in the estimation of right-thinking members of society, generally, or which tends to make them shun and avoid that person.”

Defamation is the publication of a statement that reflects on an individual’s reputation and tends to lower him in the estimation of right-thinking members of society generally or tends to make them shun or avoid him.

• Libel – Representation in a permanent form through writing or printing or picture or effigy or statute.

• Slander – Depiction in transient form. It is basically through words or gestures.
Defamation may be committed in two ways, either by speech or by writing. The former is described as ‘SLANDER’ and the latter as ‘LIBEL.’ The former is spoken defamation while the latter is written defamation, which may assume various forms like physical symbols, statues, picture or caricature, etc. Other types of slander which are equivalent to speech are shake of the head, nod, winking, hissing, and many others.

Essentials of Defamation-
a. There must be a defamatory statement.

b. The defamatory statement must be understood by right-thinking people or reasonable minded persons as referring to the plaintiff.

c. There must be the publication of the defamatory statement, i.e., it must be communicated to some person other than the plaintiff himself.

d. In the case of slander, either there must be proof of special damages.

Defamation – Civil And Criminal
Criminal Suit
A criminal suit would be filed under Sections 499 and 500 of the IPC  and must require the order of a magistrate before the police can begin investigations. Section 499 defines defamation, while Section 500 provides the punishment for defamation. Defamation is defined as an imputation that may use words, gestures, or signs, which is made by one person who knows that it will harm the reputation of another person. According to Section 499, both deceased persons and body corporates are capable of being defamed, and ironical statements are not protected from defamation. The primary test of whether the person’s reputation is harmed is whether, in the “estimation of others,” the imputation has “directly or indirectly” detrimentally affected their reputation in the ways enumerated under section 499 of IPC. The punishment for defamation is a prison sentence up to 2 years or a fine, or both are given under section 500 of the Indian Penal Code.

Civil Suit
No law lists defamation explicitly as a civil wrong. Parties will have to file a suit under Section 19 of the Code of Civil Procedure, 1908, which only talks about suits for “for compensation for wrongs done to persons” and does not explicitly mention defamation. Defamation falls under an area of civil law known as tort, which does not rely on legislations but instead defines the limits of civil wrongs through an extensive body of cases that happened. Every time a judge decides on a matter, all subsequent cases involving similar facts are guided by that judgment. Unfortunately, Indian tort law is underdeveloped as most of the people prefer to let the state fight their battles for them. For example, most people prefer to call the police rather than file a suit for nuisance.

This is because it is a well-known fact that fighting a case in Indian courts is generally a lengthy and expensive affair that only gets resolved after many years. The end result is that there are not enough tort cases in India to give Indian tort law the robustness and depth that is with the United Kingdom or USA tort law.

Procedure for filing defamation case-
•  Civil suit can be filed under order 7 rule 1 of Civil Procedure Code,1908, and criminal case can be filed for offenses under section 499 and 500 of Indian Penal Code,1860.
•  Complaint about defamation will be prepared under section 200 of the criminal procedure code,1973.
•  Case of civil nature must be filed in civil court, and if it is of criminal nature, it must be filed in ACCM court.
•  7.5%  of the claimed compensation in a civil case must be given as court fee.

Legal Sections-
Section 499 of the IPC defines ‘defamation’ as

1. Through: (i) words (spoken or intended to be read), (ii) signs, or (iii) visible representations

2. Which is a published or spoken imputation concerning any person

Section 500 – Punishment for Defamation
Whoever defames another shall be punished with simple imprisonment for a term which may extend to 2 years or with fine or both.

Section 501- Printing or engraving matter is known to be defamatory
Whoever prints or engraves any matter, knowing or having a good reason to believe that such matter is defamatory to any person, shall be punished with simple imprisonment for a term which may extend to two years or with fine or with both.

Conclusion-
The law of defamation seeks to protect the reputation of a person. Meanwhile, other cases have also highlighted, especially in politics, such as the defamation case filed against Gogoi or the alleged arrest of Kiku Sharda. The decision brings finality to the case but raises specific questions in its wake in the mind of the people. For instance, in a developing economy like India is resorting to penal provisions justified, especially in an era where reformative justice is replacing retributive justice. Besides, the growing intolerance and lack of patience in the nation is another issue that might get a reason due to this judgment. In such situations, there becomes a need to shed one’s inhibition and discuss to get solutions. One such proposition in this era would be the right to reply.

However, owing to the chilling effect which might be incumbent on the individual or organization, the right to reply has just added on the scepticism. However, the right to respond appears as a civilized manner to address matter rather than moving to conclusions, convicting, and asking for damages. Some US states and other countries have applied this concept. Similarly, we too can use this concept.