The Sexual Harassment of Women at Workplace (Prevention, Prohibition and Redressal) Act, 2013

The Sexual Harassment of Women at Workplace (Prevention, Prohibition, and Redressal )Act 2013 is a legislative act in India that seeks to protect women from sexual harassment at their workplace. 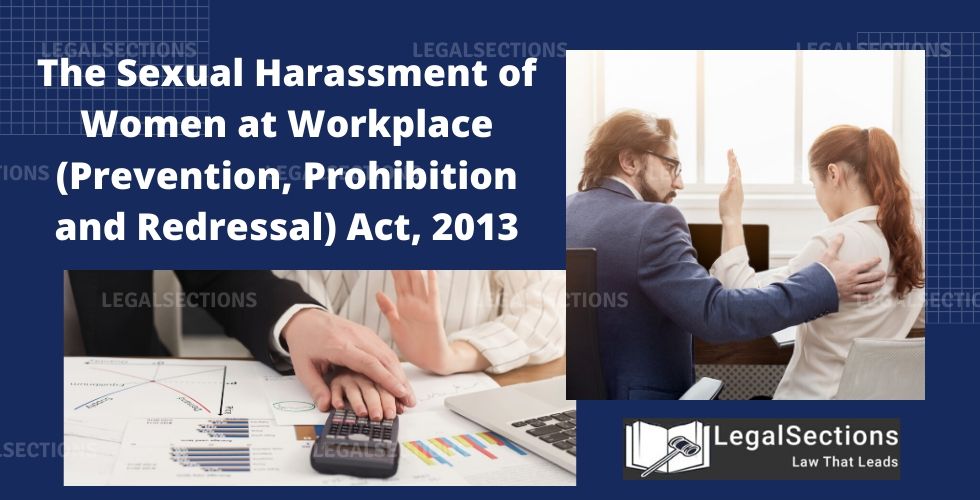 A safe workplace is, therefore, a legal right of a woman. Convention on Elimination of all Forms of Discrimination against Women (CEDAW), which was adopted by General Assembly in 1979 and which was ratified by India. It underlines that discrimination and attacks on
the dignity of women violates the principle of equality of rights.

The Sexual Harassment of Women at Workplace (Prevention, Prohibition and Redressal )Act, 2013 was enacted to ensure safe working spaces for the female part of the society and to build enabling working environments that respect women's rights to equality of status and opportunity. A practical implementation of the act will contribute to the realisation of their right to life and liberty, gender equality, equality in working conditions everywhere. The sense of security at the workplace will improve women's participation in work, resulting in their economic empowerment.

What is Sexual Harassment of Women at Workplace?

The Sexual Harassment of Women at Workplace (Prevention, Prohibition, and Redressal )Act 2013 is a legislative act in India that seeks to protect women from sexual harassment at their workplace. The act came into force from 9 December 2013. Sexual harassment of women at the workplace is an act or a pattern of behaviour that comprises physical, mental, emotional, or financial safety and security of women workers. If the employer or the co-worker by any action or words or gesture creates a hostile environment for a women worker, it amounts to sexual harassment of a women

Having raised the bar of responsibility and accountability in the Vishaka Guidelines, the Supreme Court placed an obligation on workplaces, institutions where women work and those in positions of responsibility, to uphold working women's fundamental right to equality and dignity at the workplace. Three significant obligations were imposed on institutions to meet the standard, namely:
• Prohibition
• Prevention
• Redress

It is important to note that the act provides a civil remedy to women, but if a woman wants she has a right to take both civil and criminal proceedings.
According to Section 2(n) of the act "sexual harassment" includes any one or more of the following unwelcome actions or behavior (whether directly or by implication) namely:—
1. Physical contact and advances
2. A demand or request for sexual favours
3. Making sexually colored remarks
4. Showing pornography
5. Any other unwelcome physical, verbal or non-verbal conduct of sexual nature.

Who can File a Complaint?

1. The complaint must be made in writing within 3 months of the incident. In the case of a series of events, the report must be prepared within 3 months from the date of the last incident. The time limit can be extended to three more months on valid grounds.
2. At the complainant's request, the committee can take a step to mediate a reconciliation before initiating an enquiry. The legal heir can make a complaint on behalf of the woman in case of physical or mental capacity, death or due to other reasons.
3. The complainant can ask for transfer (for herself or the respondent) 3 months leave or other relief during the inquiry period.
4. The inquiry should be completed within 90 days from the date of the complaint. Non- compliance is punishable under the act.

In 1992, a rural level change agent, Bhanwari Devi was engaged by the state of Rajasthan as a Sathin. She works towards the prevention of the practice of child marriages. Her work was met with resentment and attracted harassment from men of that community. Bhanwari Devi reported this to the local community, but no action was taken in this regard. The omission came at a significant cost – Bhanwari Devi was subsequently gang-raped by those men.

The Bhanwari Devi case revealed the present sexual harm to which millions of working women are exposed across the country, everywhere and every day irrespective of their location. It also shows the extent to which the harm can be done to women if nothing is done to check sexually offensive behaviour in the workplace.

Based on the facts of Bhanwari Devi's case, a Public Interest Litigation (PIL) was filed by Vishaka and other women groups against the State of Rajasthan and Union of India before the Supreme Court of India. It proposed that sexual harassment is recognised as a violation of the fundamental right of women to equality, and all workplaces are made accountable and responsible to uphold these rights.

CASE- Vishaka vs. State of Rajasthan

In a landmark judgement, the Supreme Court of India created legally binding guidelines basing it on the Right of Equality and Dignity accorded under the Indian Constitution as well as the UN Convention on the Elimination of all Forms of Discrimination against Women (CEDAW).

It included :
•    A definition of sexual harassment.
•    Shifting accountability from individuals to institutions.
•    Prioritizing prevention.
•    Provision of an innovative redress mechanism.

The Supreme Court defined sexual harassment as any uninvited, sexually determined physical, verbal and non-verbal conduct. The definition also covered situations where women could be disadvantaged in her workplace as a result of threats relating to employment decisions that could negatively affect her working life and environment.

It placed responsibility on employers to ensure that women did not face any hostile environment and prohibited victimization of those cooperating with an enquiry, including the affected complainant as well as witnesses.

It directed for the establishment of a redressal mechanism for women in the form of Complaints Committee. The committee was mandated to be headed by women employee, with not less than half of its member being women and provided for the involvement of a third party person, i.e. NGO expert on this issue, to prevent any undue pressure on the complainant.

Vishakha established that international standards could serve to expand the scope of India’s constitutional guarantees and fill the gaps wherever they exist. India’s innovative history in tackling sexual harassment at the workplace, beginning with the Vishakha Guidelines and subsequent legislation has given critical visibility to the issue. Workplaces must now own their responsibility within this context and ensure that women can work in a safe and secure environment.

The government has done its work to enact the law now it is in the hands of the organization and its employer to administer it properly. The organization should take this matter seriously. This will send a message to every person in the organization that the employer is interested in protecting the rights of women. The employer must provide a safe working place for female employees.

Above all these, there should be social acceptability, and women should not fear to come forward; they must be courageous to speak out for themselves. Every female should know about her rights.