The Eve-Teasing Malaise in India

Eve-teasing is harassment of female gender by strangers in public places. It can be verbal and non-verbal. 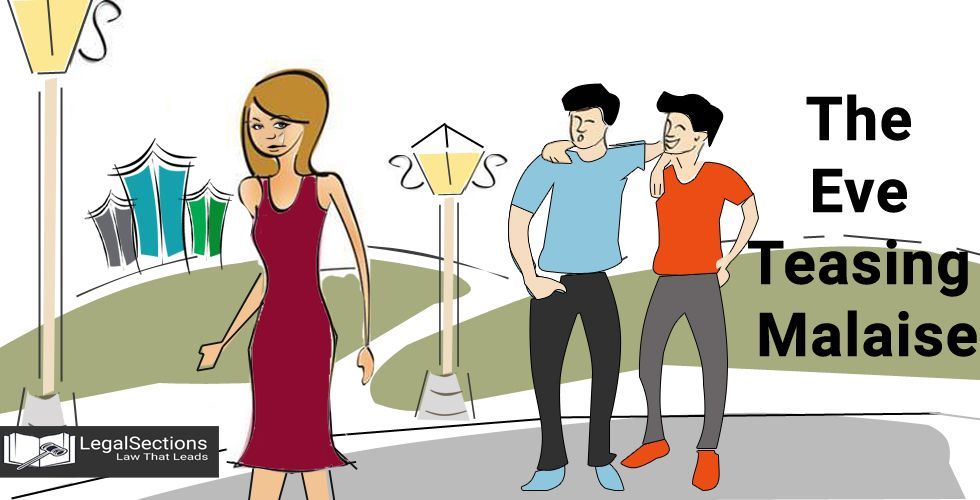 Only 10% of cases of eve-teasing reported – headlines of the newspaper “The Hindu.” It raises a question mark on the safety of women in Indian society. Eve teasing is an everyday situation faced by females, no matter what her age is.

Public places like malls, restaurants, parks, educational institutions, places of worship, places of festival celebration, and even buses are full of eve-teasers because there is no uniform law in the country to curb Eve Teasing.

Eve teasing is a euphemism used throughout South Asian Continents i.e., India, Pakistan, Bangladesh, and Nepal, for public sexual harassment of the female gender by the male gender.
Eve Teasing is a mindset and set of behaviors that are constructed as an insult and act of humiliation of women.
It is harassment of female gender by strangers in public places. It can be verbal and Non- verbal. Whistling, catcalling, touching, blowing kisses, stalking, and sexual gesturing are all instances of eve-teasing.

1. A negative mindset of people to look at girls as women is only to fulfil their physical needs.
2. Male-Dominated society
3. Eve-teasing as a part of the fun for college going boys.
4. The adverse impact of social media
5. Lack of security for women
6. Degradation of social and moral values.
7. Absence of strong punishment

Impacts on the Life of Women
-> Early Marriage- Eve teasing forces parents to do early age marriage of their daughters because they have a fear of their social status.
-> Drop out- This happens mostly in rural areas when the safety of the female child is under threat; their parents prefer to stop education.
-> Suicide- lack of support to the victim by her family. In such a situation, women may attempt suicide.
-> Psychological Impact- Anxiety, Depression, and schizophrenia is usual among females who face eve teasing in their day-to-day life.
-> Reduction in the Mobility of Women- Eve teasing restricts the mobility of women in the public sphere, which contributes to their less participation in external activities.

Violation of fundamental human rights-Eve Teasing amounts to a breach of Article 14 and 15 of the Indian Constitution, and it also invades the Right to Privacy and Right to live with Dignity under Article 21.

Indian laws don’t use the word “ Eve teasing,” victims usually seek recourse through these sections –
Section 294 - If any person does an obscene act or sings, recites or utters any obscene song, ballads or words in a public place and such action causes annoyance to others then that person shall be imprisoned for a term with either description which may extend to three months or with fine or both.
Section 509 - If a person with intent to insult the modesty of a woman utters any word, makes any sound or gesture, or exhibits any object, intending that such term or sound or such gesture or object intrude the privacy of the woman shall be punished with simple imprisonment which may extend to one year or with fine or both.
As there is no specific section for eve-teasing, police officers are confused as to under what section they should charge eve-teasers for the offense.

2)   Rupan Bajaj & Another vs. KPS Gill
In this case, the Supreme Court has explained the meaning of “modesty” concerning women. More and More girl students, women etc.go to Educational institutions and workplaces, etc. and their protection is of extreme importance to a civilized and cultured society. The experience of women and girl children in overcrowded buses, metros, trains etc.are horrendous and a painful ordeal.

The current situation of the safety of females living in India is known to the world because Indian females face all kinds of violence. Eve teasing is the first step to rape, and it is a more prominent issue than rape as it is faced by every woman once in her life.
Rape is a grave offense addressed by lawmakers, but it is an extended form of Eve teasing, which is not addressed at all. If it is addressed, then there will be fewer cases of rape.

Suggestions for the Safety of Women

-> Need to increase the role of the family to give moral education to males to respect a woman.
-> The negative mindset of people should be changed; the male and female should be treated equally.
-> There is a need for implications of laws that can directly make an effect on this, and proper laws should be made to avoid confusion of police officers i.e., under which section case has to be registered.
-> There should be a social worker in Every Educational Institution to counsel students.
-> Moral Education should be given in every educational institute.
-> Local Police play an important role.

Eve teasing is increasing day by day in the country. We need to take the necessary step to prevent females from this social evil. It should be treated as an independent crime. More strict laws are needed against eve-teasing, and its implementation should be proper. If lawmakers form a bill dealing with it, then there will be a significant decline in the number of cases of eve-teasing, resulting in reduce instances of suicide, murder, and especially rape. Eve teasing should be curved from the root because it is the first step of all these crimes.