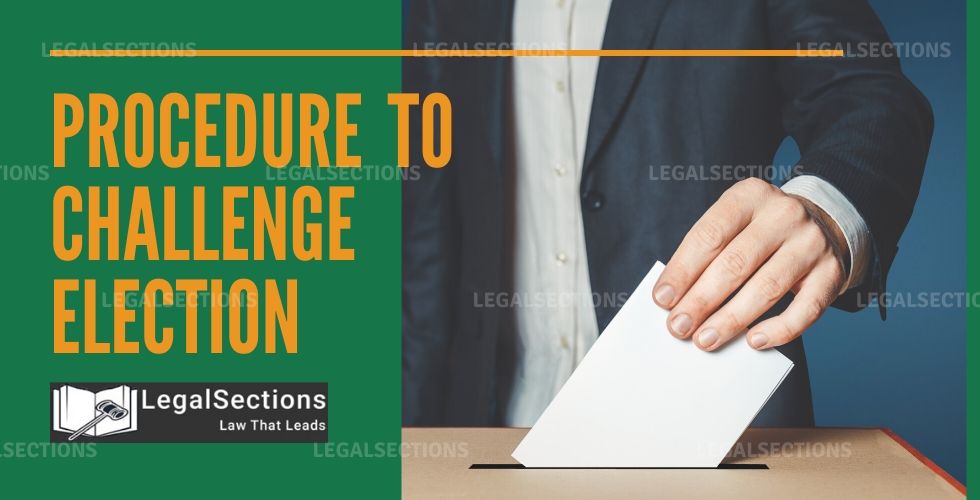 A Procedure for challenging results is desirable at every stage of the vote tabulation process. This helps to ensure that the election process is transparent, that election authorities are accountable, answerable and that the election outcome is acceptable to all parties. Aggrieved parties and candidates should be able to challenge results based on factual information and are entitled to an independent and fair hearing of their case.

Effective mechanisms for challenging results of an election add to the credibility of an election outcome. If a party to an election is not satisfied that an election has been appropriately conducted the ability to effectively challenge the election result will ensure that any genuine errors are corrected. If any fraudulent activities are identified, they were dealt on time. Election results can generally be challenged in many ways and at several points in the process. A complaint often needs to be filed within a specific period, and it should meet certain criteria.

Challenging Results During the Vote Count

At the first stage of the counting process for paper ballots when ballot boxes are opened, and they are counted for the first time party and candidate representatives are often given the right to challenge whether a ballot paper is genuine or whether a ballot paper is valid or invalid or whether it has been correctly sorted to a candidate or party.

Where mechanical or electronic voting methods are used, political parties and candidates and observers should have the right to inspect audit trails and any source documents used, and they have the opportunity to challenge any alleged irregularities. In many cases, challenges may be made verbally, and in some cases, it may be desirable to have a written process.

Representatives of candidates or parties are often given the right to challenge the counting process. In some cases registered voters, local or international observers may also be given this right to challenge.

As recounts can be time-consuming and expensive, the responsible electoral official may be given the discretion to decide whether to grant or not to grant a recount. Generally, recounts are only conducted if there is a small difference between the winning and losing party or candidate and if there is some doubt as to the accuracy of the count.

If the initial result is a tie, it is wise as a general rule to automatically conduct a recount to determine whether any mistakes were made that if corrected, could break the tie position. The most important consideration is to ensure that all parties are satisfied with the outcome of elections. If failure to conduct a recount will lead to one or more parties not accepting the results of elections, a recount could be recommended.

A recount can either be a full or partial recount. Thorough records of any recounts conducted should be kept safe. It is necessary to satisfy all parties that proper procedure has been followed and may be needed if the election result is challenged at a later stage.

There should be a time limit on applying for a recount of votes. In most cases, recounts will only be permitted within a short time after the completion of counting like there may be a 24-hour or 48-hour limit or only before the official declaration of the final election result. After that time recourse may only be permitted in a court or tribunal.

Challenging Election Results before a Court or Tribunal

After any administrative recounts are resolved, and the electoral authority has officially declared the results of the election there may be further opportunity to challenge the election result by appeal to a court or a special election appeal tribunal. Some jurisdictions establish special electoral tribunals or courts specifically during the period of elections. A challenge to a court or election appeal tribunal is generally made in a formal legal petition. Challenges may be made by candidates, parties or persons eligible to vote in the election or by the electoral administration.

There will generally be a time limit on challenging results of the election before a court or tribunal. This limit is usually longer as the legal nature of court or tribunal proceedings requires more significant preparation. In addition, the court or tribunal may be required to hand down its decision within a specified time.

At this stage, any aspect of the election may be questioned, including -

Section 100 of the Representation of People’s Act deals with the grounds on which an election may be challenged through an election petition. Section 100 reads as follows-

Grounds for Declaring Election to be Void –

1. Subject to the provisions of sub-section (2), if the High Court is of opinion –

a. That on the date of his election a returned candidate was not qualified or was disqualified, to be chosen to fill the seat under the Constitution or this Act or the Government of Union Territories Act, 1963(20 of 1963): or

c. That any nomination paper has been improperly rejected: or

d. That the result of the election, in so far as it concerns a returned candidate, has been materially affected-

i. By the improper acceptance of the nomination, or

ii. By any corrupt practice committed in the interests of the returned candidate by any agent other than his election agent, or

iv. By any non-compliance with provisions of the Constitution or this Act or any rules or orders made under this Act,

The High Court shall declare the election of the returned candidate to be void.

2. If in the opinion of the High Court, a returned candidate has been guilty by an agent, other than his election agent, of any corrupt practice but the High Court is satisfied –

b. That the candidate and his election agent took all reasonable means for preventing the commission of corrupt practices at the election; and

c. That in all other respects the election was free from any corrupt practice on the part of the candidate or any of his agents, then the High Court may decide the election of the returned candidate is not void.

Thus section 100 of the RPA,1951 provides two kinds of grounds to the petitioner: first -the grounds in clauses (a) to (c) are grounds of the election petition as such while Second – the grounds in clause (d) are available to a candidate only if the candidate as far as a result is concerned has been ‘materially affected.’ What shall amount to being materially affected has not been specified in the Act.