The general meaning of the word custody is the detention of a person. Custody of a person is of two types, i.e. judicial custody and police custody. 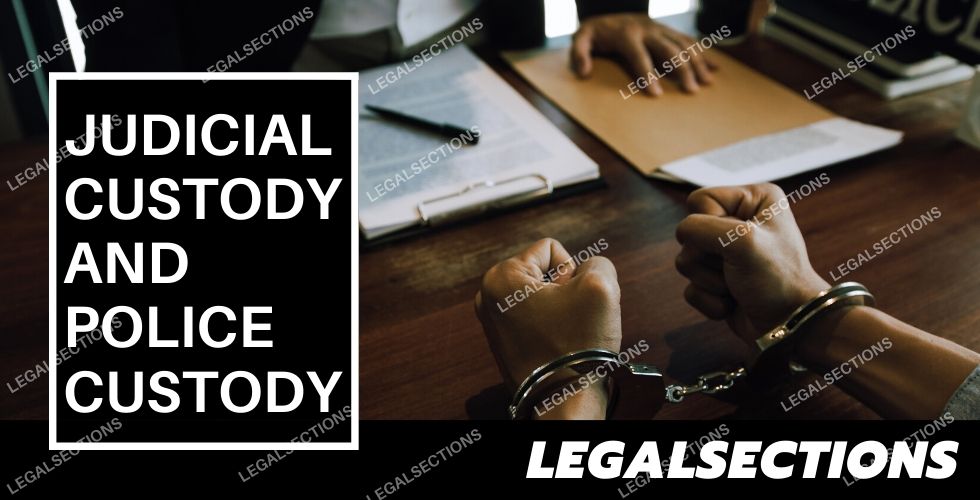 The general meaning of the word custody is the detention of a person. Custody of a person is of two types, i.e. judicial custody and police custody. In both models, the person is detained in the custody of the law, and the person is prevented from committing any other further crime or from interfering in the investigation of the case. An accused is kept under judicial custody and police custody according to the rules of the Code of Criminal Procedure, 1973.

When following the receipt of an information or complaint or report by police about a crime, an officer of police arrests the suspect involved in the crime reported, to prevent him from committing the offense further, such officer brings that suspect to a police station, it’s called Police Custody. It is the custody of a suspect with the police in jail at the Police station, to detain the suspect. During this type of detention, the police officer in charge of the case may interrogate the suspect, and this detention is not supposed to be longer than 24 hours, excluding the time of traveling.

It implies that the accused is kept in jail and is under the custody of a magistrate. It is the Magistrate who decides whether he or she should stay in police custody or be remanded to judicial custody. Judicial custody can be extended to a maximum period of 90 days for offences punishable with more than 10 years of imprisonment, and 60 days for other offences.

LAWS OF CUSTODY IN INDIA

Section 167 (Cr.P.C.) - The provisions for keeping a person in custody for the purpose of furthering investigation, in India is governed by Section 167 of the Code of Criminal Procedure. Section 167 of the Cr.P.C. allows that an individual may be held in the custody of the police for a time period of 15 days on the orders of a Magistrate. A Judicial Magistrate may remand an individual to any form of custody extending up to 15 days, and an executive magistrate may order of custody extending up to 7 days. Police custody may extend only up to a time period of 15 days from the date custody begins but judicial custody may extend up to 90 days for a crime which is related to a punishment of death, life imprisonment or period of imprisonment exceeding 10 years and 60 days for all other crimes if the Magistrate is convinced that sufficient reasons exist, following which the accused must be released on bail.

The most important distinction is of the fact that the accused can be sent to police custody only within the first 15 days of the presentation before the Magistrate after the arrest, as held by the Supreme Court in the case of State v. Dharampal,(1982)as mentioned in proviso (a) to section 167(2). But in case of judicial custody, such a person can be sent to prison, either within the first 15 days or even after 15 days.

But if the police report is filed in above mentioned days, then the accused would not be released on default bail and will continue to be detained under judicial custody because after investigation the process of enquiry has been started.

Article 22 of the Indian Constitution -
The rights of the accused begin from the time he was arrested. Article 22 of the Constitution provides for the protection of the arrested person to the extent that he has a right to be informed of the reason for arrest and he must be produced before the nearest Magistrate within a period of 24 hours. Article 22 (1) says that he shall be entitled to consult and to be defended by a legal practitioner of his choice.

Section 50( Cr. P.C.)
It is a corollary to Article 22 (1), and Article 22 (5) of the Constitution of India enacts that the persons arrested should be informed of the ground of arrest and of right to bail.

Section 57 (Cr.P.C.)
A careful reading of S.167(1) of the code of criminal procedure makes it clear that the officer in charge of the police station or the investigating officer (if he is not less than the rank of sub-inspector) can ask for remand only when there are grounds to believe that the accusation or information is well-founded and it appears that the investigation cannot be completed within the period of 24 hours as specified under Section 57.

Article 32 and 226 of the Constitution -
If the arrest is invalid on account of breach of procedure or violation of any other right or if the custody is not given within the framework of the law by a competent Magistrate who has jurisdiction over this issue, the person so detained can file a writ of habeas corpus under Article 32 or Article 226 of the Indian Constitution. However, it must be noted that a writ does not lie against legal custody, no matter what rights may have been violated before the lawful detention of a person.

1. Raj Pal Singh v. State of U.P (1983)
It was held in the case that Magistrate’s power to award remand is not mechanical and adequate grounds must be present if Magistrate wants to exercise his power of remand. Court also said that the remand order sheet need not look like a judgment delivered after a full trial, but the application of main must be evident.

2. Central Bureau of Investigation, New Delhi v. Anupam J.Kulkarni (1992) In this case the question regarding arrest and detention in custody was dealt within which it was held that the Magistrate under S.167(2) could authorize the detention of the accused in such custody as he thinks fit, but it should not exceed 15 days in the whole. The custody can be police or judicial custody as the Magistrate thinks fit.

3. Kami Sanyal v Dist. Magistrate Darjeeling (1990) In this case Supreme Court noticed that “while an individual is committed to jail custody by a competent Court by an order, which prima facie does not appear to be without jurisdiction or wholly illegal, a writ of habeas corpus in respect of that individual cannot be granted”.

4. Babunandan Mallah v. State (1972 ) In this case High Court held that “if the detention of the accused is legal when the bail application is preferred, his previous illegal detention should not be considered.”