Can A Non-Lawyer Appear For A Litigant In Court

Is it necessary to have a law degree for the fighting case or a non-lawyer can appear before a court for a litigant in a court of law? 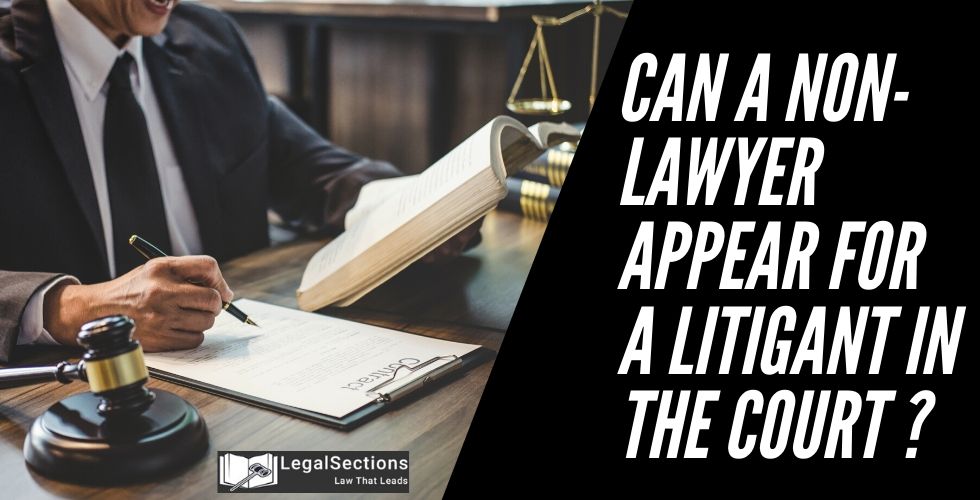 Section 30 of Advocate Acts reads “Right of Advocates to practise—Subject to provisions of this Act, every advocate whose name is entered in the [State roll] shall be entitled as of right to practice throughout the territories to which this Act extends,—

1. In all courts including the Supreme Court;

2. Before any tribunal or person legally authorized to take evidence; and

A Non-Lawyer Can Appear, But Only If Court Permits

A judgment delivered by the Apex Court four decades ago in Harishankar Rastogi vs Girdhari Sharma AIR 1978 SC 1019 answer the question whether a person who is not an advocate by profession can be permitted to plead on behalf of the litigants.

“A private person, who is not an advocate, has no right to barge into Court and claim to argue for a party. He must get the prior permission of the Court, for which the motion must come from the party himself. It is open to the Court to grant or withhold permission in its discretion. In fact, the Court may, even after granting permission, withdraw it half-way through if the representative proves himself reprehensible. The antecedents, the relationship, the reasons for requisitioning the services of the private person and a variety of other circumstances must be gathered before grant or refusal of permission.”

A leader, by definition, includes any person other than one authorized by law to practice in a court if he is appointed with the permission of the Court, to act in particular proceeding suggest section 2(q) of the Cr.P.C, observed Justice VR Krishna.

A non-lawyer can appear before the Court on behalf of a litigant if and only when the concerned Court grants permission to that person. As held in Harishankar Rastogi, the antecedents, the relationship, the reasons for requisitioning the services of the private person and a variety of other circumstances must be gathered before the grant or refusal of permission. Kanta Das & Amiya Kanti Das Vs. S.M. Sefalika Ash in G.A. No. 3659 of 2017 with far-reaching consequences, the Calcutta High Court on February 21, 2019 has clearly held that only advocates enrolled under the Advocates Act are authorized to plead and argue on behalf of litigants before a court of law. Those who are not enrolled cannot plead and argue on behalf of litigants before a court of law. Justice. The Court further relied on Section 119 of the Civil Procedure Code which provides the following: Unauthorized persons not to address Court - Nothing in this Code shall be deemed to authorize any person on behalf of another to address the Court in the exercise of its original civil jurisdiction, or to examine witnesses, except where the Court shall have in the exercise of the power conferred by its charter authorized him so to do or to interfere with the power of the High Court to make rules concerning advocates, vakils and attorneys.

The Advocates Act, 1961 provides the law relating to the working of Legal Practitioners. As per Section 29 of the Advocates Act, Advocates are the only recognized class of persons entitled to the practice law profession.

However, Section 32 of the Act gives power to any Court, authority or person not enrolled as an advocate to appear before him in any particular case. In Harishankar Rastogi vs Girdhari Sharma AIR 1978 SC 1019, it was held that any party before presenting themselves as an advocate should seek from the Court. Even after giving permission, the Court can withdraw it half-way if it thinks fit it in the interest of justice.

The consent of the parties is also vital to factor while giving permission to a non-lawyer to appear in Court as an Advocate. If the party agrees and the Court gives permission, then only a non-lawyer can appear in a court of law.

As per Section 45 of the Advocates Act, the person who practices in any Court but is not entitled to do so will be punished with the imprisonment of up to a term which may extend to six months.

Article 19 of the Indian Constitution guarantees certain freedoms to the citizens of this country which includes right to practise any profession or to carry on any occupation, trade or business.

Therefore, it can be said that the person has the right to appear in any court in the country. There are exceptions based on general rules that are only regulatory in nature, and the main motive is to impose reasonable restrictions in the interest of individuals.

Every Court has their rules & regulations which serve as a guideline for procedure implementation, and these rules also talk about contending case without an advocate.

Rules are regulatory provisions and do not impose a prohibition on the practice of law. These Rules prescribe that a person who is not an advocate in the High Court is obligated to file an appointment along with an advocate. There is no absolute bar to appear. In fact, with the leave of the Court a non-advocate is also permitted to appear even without a local advocate. Also, an advocate who is not on the roll of advocates in the H.C. can appear along with a local advocate.

Alternatively not fulfilling this requirement, an advocate who is not on the rolls of advocates in the High Court can move an application before the Court seeking leave to appear without even a local advocate and in appropriate cases, such a permission can be easily granted.

Rule 37 of the Family Court (Rules) of 1988- It empowers the Court to permit the parties to be represented by a lawyer in Court.

While interpreting section 13 of the Family Courts Act, 1984 and Rule 37 of the Family (Court) Rules, 1988, in the case of LalaMahadeo Joshi vs. Dr.Mahadeo Sitaram Joshi, Court, in this case, held that section 13 of the Family Courts Act, 1984 does not prescribe a total bar to represent by a legal practitioner who would itself be unconstitutional. The Court also observed in this case that refusing permission to be represented by a legal practitioner may inevitably result in a possible miscarriage of justice.

In the case of Kishorilal Govindram Bihani vs. Dwarka bai Kishorilal Bihani, the Court said that the party might be permitted to be represented by a lawyer before Family Courts considering the complexities of the case. Even where the statute has a provision of an express bar for representation through advocate without permission of the Court, Courts have held that such permission should not be generally be denied.

Arbitration and Conciliation Act of 1996 has no provision which bars the representation of the parties by a legal practitioner. On the other side, there is an indication in the Explanation to sub-section 8 to section 31 suggesting that appearance by lawyers is permitted.

No Need of a Lawyer in Consumer Forum

A review of the provisions of the Consumer Protection Act discloses that the quasi-judicial bodies or authorities or agencies created by the Act known as District Forums, State Commissions, and the National Commission are not courts even they are invested with some of the powers of a civil court. They are quasi-judicial bodies brought into existence to give inexpensive and speedy remedies to consumers. It is clear that these forums were not supposed to supplant the existing judicial system. The idea was to help the consumers to get accessible justice and fair treatment in the matter of goods and services purchased and availed by them in a market dominated by large traders and manufacturers. Indeed, the entire Act revolves around the consumer and is framed to protect consumer’s interest. Even a consumer can also argue his own case under the provision of the Consumer Protection Act.

Same provisions are present for arguing before the Industrial Disputes Act, the Income Tax Act, the Sales Tax Act, or the Monopolies and Restrictive Trade Practices Act.