Lok Adalats is an informal system of justice dispensation which has largely succeeded in providing a supplementary forum to litigants for determination and settlement of disputes. 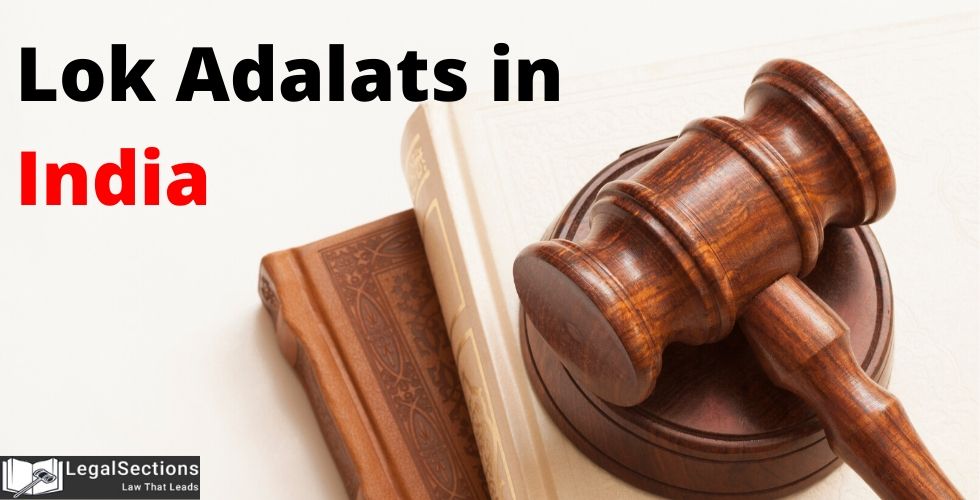 Lok Adalats is an informal system of justice dispensation which has largely succeeded in providing a supplementary forum to litigants for determination and settlement of disputes.

The first Lok Adalat was held on 14 March 1892 at Junagarh (Gujarat), and now it has been extended throughout the country.
The advent of the Legal Services Authorities Act, 1987, gave statutory status to Lok Adalats along with constitutional mandate in Article 39A of the Constitution.

Composition- Every Lok Adalat constituted for an area shall consist of such numbers of serving or retired judicial officers, and any other person.

Jurisdiction- A Lok Adalat shall have jurisdiction to determine and to arrive at compromise or settlement between the parties to a dispute in respect of:

1. Any case pending before

2. Any matter which is falling within the jurisdiction and is not brought before, any court for which the Lok Adalat is organized.

1. The number of courts and judges in all grades are less than required.

2. Large flow of cases in recent years due to diverse Acts enacted by the Central and State Governments.

3. The high cost involved in prosecuting a case in a court of law due to substantial court fees, lawyer’s fees, and incidental charges.

4. Delay in disposal of cases resulting in large pendency of cases in all the courts.

13. Cases that are not sub-judice etc.

Cognizance Of Pending Cases And Determination

a). When all the parties to the dispute agree for referring the case to Lok Adalat.

b). When one of the parties to the case makes an application to the court, praying to refer the case to Lok Adalat and the court is prima facie satisfied that there are chances for settlement in Lok Adalat.

a). Where the court is satisfied that the matter is an appropriate one to be taken cognizance of by the Lok Adalat, then the court shall refer the case to the Lok Adalat after giving a reasonable opportunity for being heard to all the parties.

b). Lok Adalat shall proceed to dispose of a case referred to it. It shall be guided by principles of law, equity, justice, and fair Permanent Lok Adalats. It shall yearn to reach a settlement or compromise between parties.

c). When no compromise is accomplished, the case is to be returned to the court, which referred to it. Then the case will proceed in the court from the stage immediately before the reference.

1. The Lok Adalat shall have the powers of a civil court under the Code of Civil Procedure, 1908, while trying a suit, in respect of the following matters:

a). Power to summon and enforce the attendance of any witness and to examine him/her on oath.

b). Power to enforce the discovery and production of any document.

d). Power for requisitioning of any public record or document or copy thereof or from any court.

e). Such other matters as may be prescribed.

2. Every Lok Adalat shall have the power to specify its own procedure for the determination of any dispute coming before it.

3. All proceedings before a Lok Adalat shall be deemed to be judicial proceedings within the meaning of Sections 193, 219 and 228 of IPC.

4. Every Lok Adalat shall be deemed to be a Civil Court for the purpose of Sec 195 and Chapter XXVI of Cr.P.C.

3. Supply of power, water, and light to the public

4. System of public sanitation or Conservancy

5. Insurance services or any other services as notified by the Central or State Governments.

1. Any party to a dispute can apply to PERMANENT LOK ADALAT for settlement of a dispute in respect of a public utility service, which is not pending before any court in India.

2. PERMANENT LOK ADALAT does not have jurisdiction to entertain such disputes involving offenses which are not compoundable.

3. PERMANENT LOK ADALAT does not have jurisdiction to entertain a matter where the value of the property exceeds ten lakhs, which limit can be enhanced as provided for.

Once an application is preferred to PERMANENT LOK ADALAT for determination of a dispute, no party to such an application can invoke the jurisdiction of any court in the same dispute.

1. Speedy Justice: - Lok Adalats ensure speedier justice because it can be conducted at suitable places, arranged very fast, in local languages, and even for the illiterates.

2. Justice At No Cost: - Lok Adalat is the institutionalized mechanism of dispute resolution in which the parties do not have to bear any expenses. There is no court fee in Lok Adalat. If the case is already filled in the regular court, the fee paid is refunded under the Court Fees Act if the dispute is settled at the Lok Adalat.

3. Solving Problems Of Backlog Cases: - In a Lok Adalat, if a compromise is reached, an award is made and is binding on both the parties. It is enforced as a decree of a civil court. An important aspect is that the award is final and cannot be appealed, not even under Article 226.

4. Maintenance Of Cordial Relations: - The main thrust of Lok Adalats is compromise. When no compromise is reached, the matter goes back to the court. In Lok Adalats, disputes are not only settled but also the cordial relations between the parties are retained as disputes are resolved peacefully.

The most desired function of Lok Adalats may seem to be clearing the backlog. The maximum number of Lok Adalats needs to be organized to achieve the Gandhian Principle, i.e., “access to justice for all”. During the last few years, Lok Adalat has been found to be a successful tool of Alternate Dispute Resolution(ADR) in India. The system received wide acceptance not only from the litigants but from the public too. Therefore, it may be concluded that the system of Lok Adalat and giving free legal aid to eligible persons is a very noble one which has helped judiciary not only in speedy disposal of cases but has given relief to the litigant, particularly to them who are poor and cannot afford to protect their right through a court of law.