Is The Consent Of Accused Required For Taking Blood Samples?

Its use as evidence in criminal investigations has grown in recent times in the Indian judicial system. DNA testing has helped law enforcement to identify criminals and solve severe crimes. On the other hand, DNA-supported evidence supports in proving that many convicted people who are innocent. 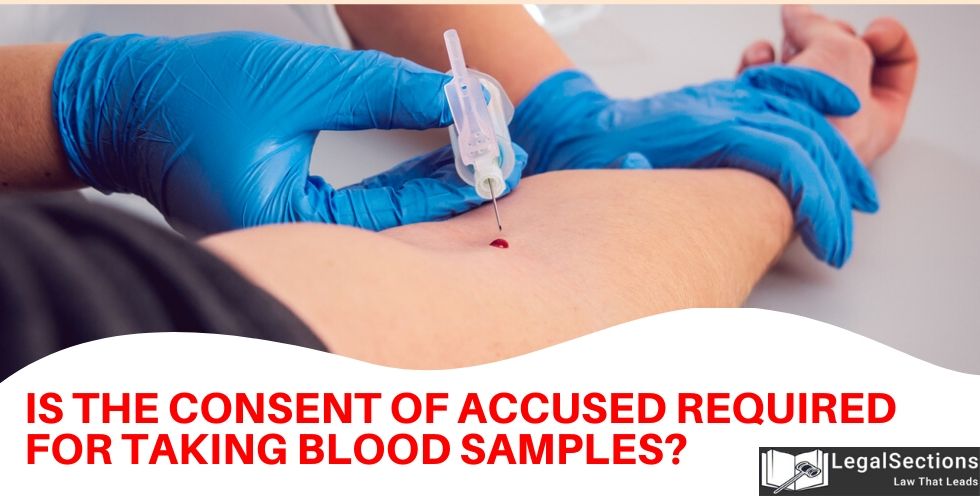 Its use as evidence in criminal investigations has grown in recent times in the Indian judicial system. DNA testing has helped law enforcement to identify criminals and solve severe crimes. On the other hand, DNA-supported evidence supports in proving that many convicted people who are innocent.

Section 53 and 54 of the Code of Criminal Procedure authorizes medical examination of accused on the arrest. Insertion of Sections 53 and 54 of the code was intended to remove the lacuna found in the old law where there was no specific provision authorizing the police officer to subject the arrested person to a medical examination without his consent. However, the new Provision of Section 53of the Code confers power upon the Investigating machinery to get the accused examined, and Section 54 of the code confers such right on the accused to prove his innocence or otherwise. Section 53 of the Code imposes an obligation upon the arrested person to subject himself for medical examination at the instance of a police officer to help the investigation. Full power is given to the investigating agency to cause the accused to be examined by the Medical Practitioner, and the Section does not restrict to any particular test that has to be done by the Medical practitioner.

The Division Bench of Allahabad High Court concluded, as mentioned earlier, on applying the provision of Section 367(1) and Section 482 of the Code of Criminal Procedure. It also held that there is nothing repulsive or shaking to conscience in taking the blood of an accused person to establish his guilt and so far as the authority of Magistrates to direct medical examination, the Allahabad High Court in the case of Neeraj Sharma v. the State of UP, while discussing the power of the Magistrate to direct Medical examination under Section 53 of the code, the court held that it would not be proper to give a restricted meaning to the word “examination” used in Section 53 of the code. The examination of the accused should mean complete examination, which a medical practitioner may like to have by all modern and scientific tools available to give his opinion, and it should not be confined to a superficial examination by having a look at the body of the accused. A doctor who is trained is used to employing the modern-day technique for diagnostic may refuse to give his opinion unless he performs the necessary scientific tests. The legislature was also conscious of this has therefore made a specific provision permitting the use of force while enacting Section 53 of the Code of Criminal Procedure of 1973. Therefore, a Magistrate has full power to direct that a medical examination of the accused be performed or samples of his nails, hairs, etc. be taken where the offense alleged to have been committed is of such a nature and is alleged to have been committed under such circumstances that there are reasonable grounds for believing that such an examination will afford evidence as to the commission of an offense.

From the various new tools and techniques that science has given for the analysis of forensic evidence is the powerful and controversial analysis of deoxyribonucleic acid, or DNA, the material that makes up the genetic code of most organisms analysis, also called DNA typing examines DNA found in physical evidence such as blood, hair, and semen. It determines whether it can be matched to DNA taken from specific persons. DNA analysis has become a general form of evidence in criminal trials. It is also used in civil litigation, particularly in cases involving the determination of the paternity of identity. The admissibility of the DNA evidence in front of the court always depends on its accurate and proper collection, preservation, and documentation to satisfy the court that the evidence placed before it is reliable. No legislation in our country can provide specific guidelines for investigating agencies and the court, and the procedure to be adopted in the cases involving DNA as its evidence.

Moreover, some provisions allow examination of an individual accused of rape by a medical practitioner and the medical examination of the rape victim, respectively. But the admissibility of such evidence has remained in doubt as the opinion of the Supreme Court & High Courts in various decisions remained conflicting. Judges do not deny the accuracy of DNA testing, but in many cases, they do not admit the evidence on the ground of legal prohibition and sometimes public policy. Many developed countries have been forced to change their legislation after the introduction of DNA testing in the judicial system.

But there is no specific provision that would cover modern scientific techniques. DNA analysis is of utmost importance in determining the paternity of a child in civil disputes. The need for this evidence is most important in criminal cases, civil cases, and in the maintenance proceedings in criminal courts under Section 125 of the Code of Criminal Procedure. But it has been held by the Supreme Court on many occasions that right to life and personal liberty is not an absolute right.

DNA is broadly termed as building the genetic blueprint of life. It was first described by scientists Francis HC Crick and James D Watson in 1953. They identified the double-helix structure of DNA, which resembles a twisted ladder. They established the role of DNA as the material that makes up the genetic code of living organisms. DNA is the same in every cell throughout one’s body, whether it is a skin cell, sperm cell, or blood cell. Except for identical twins, no two individuals have the same DNA blueprint. DNA analysis of a criminal investigation uses very highly sophisticated scientific equipment – firstly, a DNA molecule from the suspect is disassembled, and then selected segments are isolated & measured. Then the suspect’s DNA profile is compared with one derived from a sample of physical evidence to see if the two match.

If a conclusive non-match comes, as a result, the suspect may be eliminated from consideration. If a match comes as a result, a statistical analysis is performed to determine the probability that the sample of physical evidence came from another person with the same DNA profile as the suspect. Jurist uses this statistical result in determining whether a suspect is guilty or innocent.

There is an urgent need to change various provisions in the Indian Evidence Act, 1872, and the Code of Criminal Procedure, 1973, to manage science and technology issues. Due to the lack of such provisions, investigating officers face problems in collecting pieces of evidence that involves modern mechanisms to prove the accused guilty.

Sadashiv Mallikarjun Kheradkar v. Nandini sadashin Kheradkar
In this case, the Bombay High Court held that there is no provision either in the Evidence Act or in the Hindu Marriage Act or the code of civil procedure, which provides for direction to a party to submit himself for giving a blood sample for test.

N D Tiwari Case
It is crucial from the viewpoint of the admissibility of such evidence. In this case, Rohit Shekhar claimed to be the biological son of N D Tiwari. But Tiwari was reluctant to undergo such a test stating that it would be a violation of his right to privacy and would cause him public humiliation.