The national anthem which signifies that despite differences in culture, traditions, religion, and a language, India is united under one flag. The National Anthem is played and sung on different occasions. 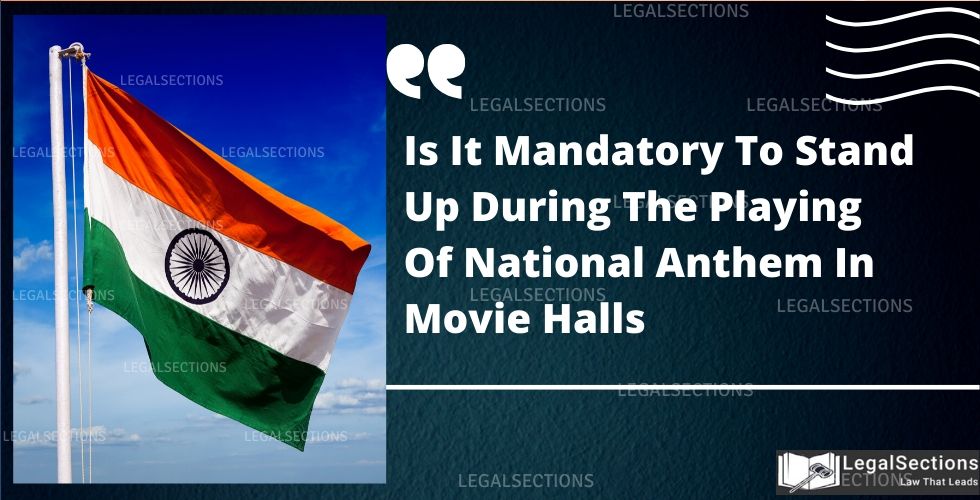 The national anthem which signifies that despite differences in culture, traditions, religion and a language, India is united under one flag. The National Anthem is played and sung on different occasions.

The instructions are issued from time to time about the correct versions of the anthem, the occasion on which these are to be played, and about the need for paying respect to the anthem by observance of proper decorum on such events.

Patriotism is a feeling that can be shown through several conducts. It is a sentiment that comes from the inside. Showing respect for the National Anthem is one way of viewing Patriotism towards the country. The genuine sense of Patriotism cannot be enforced on any person.

Standing up for National Anthem before the display of movies at theatres is not the real sense of Patriotism. An interim order passed by the Supreme  Court in Shyam Narayan Chouksey v. Union of India that the National Anthem is to be bestowed the respect and reverence it is worthy of.  Justice Dipak Misra said that this order ensures that while the National Anthem might stand adequately “respected”, the expectation of reasoned judicial orders will quiver in a corner. The case led to different inferences, like the Court does not make the crucial categorical distinction as required between a refusal to stand up for the National anthem as an actual act of disturbance as opposed to a passive act of silence or does not concern for people with disabilities. Instead, it cherishes an affirmative duty and states that all the cinema halls in India shall play the National Anthem before featuring the film and all present in the hall are obliged to stand to show respect towards the National Anthem. The case was decided correctly by the Supreme Court, but the reasoning was wrong. A true patriot shall respect other individuals, nations, and cultures regardless of any labels, by respecting another’s allegiance to their country and not targeting other communities living in the country.

To put it within the perspective of the issue in hand, the question lies whether the Legislature or the Executive could take the decision as to what constitutes due respect to the National Anthem in keeping with the spirit of Article 51A of the Constitution of India.  Article 51(A) states that It shall be the duty of every citizen of India (a) to abide by the Constitution and respect its ideals and institutions, the National Flag and the National Anthem.  Article 51(A) is part of fundamental duties which is unenforceable and broadly constructed duty. Whether the same could then be called into question before the constitutional courts, which is when the Court could either sustain the decision or strike it down, and that would be the proper time for the Court to pronounce upon the issue raised. In the case of Shyam Narayan Chouksey v. Union of India, the High Court of Madhya Pradesh ordered the deletion of a scene involving the depiction of National Anthem in the movie ‘Kabhi Khushi Kabhi Gham’ directed by the Karan Johar. The judgment of Madhya Pradesh High Court was set aside by Karan Johar v. Union of India, wherein the Supreme Court of India referred to clause V (1) of the Orders relating to the National Anthem of India issued by the Government of India. In the middle of the showing of the movie, the audience can’t predict the scene of National Anthem coming up, and for that reason, the movie could not include the sequence in section. It resulted in unintentional disrespect to the Anthem.  It states “Whenever the Anthem is sung or played, the audience shall stand to attention. However, when in the course of newsreel or documentary the Anthem is played as a part of the film, it is not expected of the audience to stand as standing is bound to interrupt the exhibition of the film and would create disorder and confusion rather than add to the dignity of the Anthem.” According to the Indian National Congress government, The Prevention of Insults to National Honor Act 1971 (hereinafter referred to as ‘1971 Act’) was enacted and penalized those found guilty of intentionally preventing the singing of Indian National Anthem or causing “disturbances to any assembly engaged in such singing” with a jail term of up to 3 years.

In a case of Supreme Court, Bijoe Emmanuel vs the State of Kerala, three students who followed the Jehovah’s Witness faith were expelled from school for not singing the National Anthem. When the action of the school authorities was challenged, the Supreme Court held that the students must be readmitted in the school, as they had not disturbed the assembly singing the National Anthem. The ratio of this decision was that the students had not disturbed the assembly or the singing by their non-participation during Anthem. This same principle should also be applied to those present in the theatre and who choose not to stand during the National Anthem in a cinema hall. The said case was decided correctly because no citizen can be punished for not standing during the National Anthem because there is no law which prescribes punishment for such acts. In the leading cases referred to as above, the Supreme Court looked into the question of citizen’s Fundamental Rights guaranteed by Part III of the Constitution of India vis-a-vis the duty to show respect to the National Anthem as mandated by the law. However, what constitutes due respect and how it must be demonstrated was treated as necessarily a policy decision to be taken by the Legislature, or, in the absence of a legislative enactment, by the Executive in the exercise of the executive power conferred upon it by the Constitution, which is why in the Bijou Emmanuel case it was the 1971 Act and in the Karan Johar v. Union of India case an Order by the Government of India was made the basis for the judicial determination of the issue. However, the enforcement of the statute or the government order was not the primary objective of the decision of the Supreme Court.

The most substantial contentions regarding playing the National Anthem on a daily basis, multiple numbers of times, is that it only results in lowering its dignity apart from exposing it to potential disrespect everyday hundred times. It is not an advertisement jingle. It is the National Anthem of India and should only be played on special occasions with dignified fashion. In September 2014, the Calcutta High Court in the case of ‘Kamal Dey vs Union of India’ issued a direction to the Central and state governments that educational institutions should strictly follow the “Orders Relating to the National Anthem of India”. The National Anthem Orders, compiled by the ministry of home affairs are in the form of guidelines and not in the form of judicial creations. They denote when and how the National Anthem has to be played. Hence, they would not result in penalties on the individual, and one could not be punished for disobeying them if such disobedience does not also result in the breach of the 1971 Act. The Madras High Court, while hearing the case of N. Selvathirumal vs Union of India, observed the same question and issued similar directions to state and Central government bodies and private schools. The court observed that “The stand of the authorities, including the Union of India, is that the National Anthem ought to be sung and is being sung. This is the stand of the Schools also.”

A bench headed by former Chief Justice of India, Dipak Mishra said a 12 Members inter-ministerial committee said in setting up by the centre would take a final call committed on the playing of National Anthem in the cinemas. The committee finally decides to make it optional. The centre’s decision had come after the top court in October 2017 observed that the ‘people could not be forced to carry patriotism on their sleeves’ and it cannot be assumed that if a person does not stand for the National Anthem, he or she is less patriotic.

People are respectful to the National Anthem due to a sense of Patriotism towards Nation, and not the other way round. Display of respect, particularly when one is forced to show respect to the National Anthem does not and cannot generate a sense of Patriotism in an individual. All it can generate is anger and resentment in people at being forced to prove their Patriotism at the beginning of every movie in cinema halls.  The love for the country comes from within and from the love for its people, regardless of identity, gender, or religion.