How to file a Public Interest Litigation (PIL)?

Public interest Litigation means litigation filed in a court of law, for the protection of “Public Interest”, such as pollution, Terrorism, constructional hazards, etc. 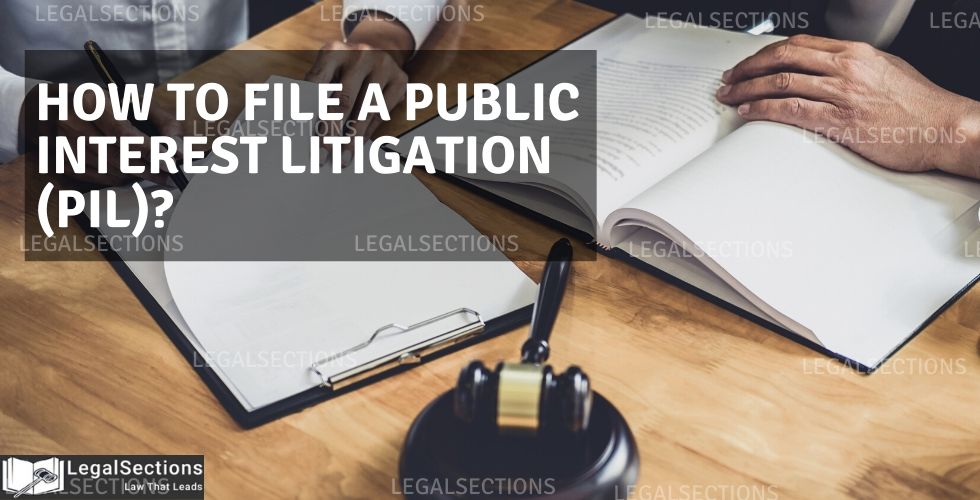 1. Public interest Litigation means litigation filed in a court of law, for the protection of “Public Interest”, such as pollution, Terrorism, constructional hazards, etc.

2. Article 32 of the Indian Constitution contains the tool, i.e. PIL, which directly joins the public with the judiciary. PIL is not defined in any statute. It has been interpreted by judges to consider the interest of society at large.

3. The main focus of such litigation is “Public Interest” there are various areas where a PIL can be filed. It is litigation which can be introduced in a court of law, not only by the aggrieved party but also by the court itself or by any other private party.

“Public Interest Litigation” means a legal action initiated in a court of law for the enforcement of public interest in which the public or a particular section of the community have pecuniary interest or some interest by which their legal rights or liabilities are affected.

How to file a PIL?

In Supreme Court: If a Public Interest Litigation is filed in the Supreme court, then (4)+(1), i.e. total 5 sets of the petition has to be filed the opposite party is served, the copy only when notice is issued.

Court Fees: A Court fee of Rs. 50 per respondent has to be affixed on the petition.

1. Proceedings in the PUBLIC INTEREST LITIGATION commence and carry on in the same manner as the proceedings of other cases.

2. However in between the proceedings if the judge feels he may appoint a commissioner to inspect allegations like sewerage problem being caused, pollution caused, trees being cut etc.

3. After the filing of replies by opposite party & rejoinder by the final petitioner hearing takes place, and the judge gives his decision.

Issues on which PIL can be filed

The following are the issues on which PIL can be filed.

• Identification and rehabilitation of child labourers

• Illegal detention and arrest of any person

• Torture of people who are in police custody

• Neglect of inmates of the government welfare home

• Maintenance of law and order in the country

• Legal aid to the poor

• Deaths due to starvation

Justice Bhagwati in S.P. Gupta’s case pointed out the essentials of PIL as under-

1. There must be a legal wrong caused to a person or to a determinate class of person, on whom the burden is imposed in violation of law or without legal authority.

2. The wrong must arise from a violation of any constitutional or legal right.

3. The wronged person (t determinate group of persons) must be unable to approach a court for relief because of – (i) poverty, (ii) helplessness; or (iii) social or economic disability or socially or economically disadvantaged person.

4. If the above conditions are satisfactory, then any member of the public can seek judicial relief for the above wrong.

5. But the court should be anxious to ensure that the person initiated the proceeding to acting bonafide to get redress for a public grievance and not to pursue personal gains or from malicious motives.

6. If the case is otherwise appropriate for PIL, then the court can act even on a letter addressed to it.

Articles 32 and 226 of the Constitution give power to any citizen to move the Supreme Court or High Courts whenever there is an infringement of a fundamental right of an individual.

Article 32 (1) guarantees the right to move the Supreme Court by appropriate proceedings for the enforcement of the fundamental rights.

Article 32(2) states that the Supreme Court shall have the power to issue directions or orders or writs, including writs like habeas corpus, mandamus, prohibition, quo warranto and certiorari whichever may be appropriate for the enforcement of any of the rights conferred by Part III of the Constitution of India.

The Supreme Court and the High Courts have equal powers to issue writs, orders, or directions for enforcement of the fundamental rights according to Article 226 of the Constitution of India. The Supreme Court expanded the meaning and scope of the fundamental rights in favour of the weaker and deprived sections of society. The purpose and scope of Articles 14, 21, and 32 of the Constitution were given a wider interpretation in favour of the weaker sections and poor people.

Court held PIL can be filed by any member of the public having sufficient interest for public injury arising from the violation of legal rights to get judicial redress. This is necessary for maintaining the rule of law and accelerating the balance between law and justice.
It is a settled law that when a person approaches the court of equity in the exercise of extraordinary jurisdiction, he should contact the court not only with clean hands but with clear mind, heart, and with clean objectives.

In this case, Public Interest Litigation directed the Co. Manufacturing hazardous & lethal chemicals and gases posing a danger to the life and health of workers & to take all necessary safety measures before reopening the plant.

In this case, Public Interest Litigation brought against Ganga water pollution to prevent any further pollution of Ganga water. The Supreme Court held that the petitioner although not a riparian owner is entitled to move the court for the enforcement of statutory provisions, as he is the person interested in protecting the lives of the people who make use of Ganga water.

Thus Public Interest Litigation is a useful tool which connects the judiciary with the society. By efficient and effective administration of justice to the public at large, which has been of great assistance to the weaker and inferior sections of the community facing hassles in the long and complicated process of litigation.

PIL is a beneficial stream which helps the common man to reach the remedy, which is helpful for the public at large, which was not earlier available to them even before actual damage is done. We should thank our judiciary who have coined this new concept which is very useful for society because there are many examples present with us which shows that it helped the common person in the field of pollution, environment, bonded labour, water and sewage problems, scams, corruption, etc. By filing the Public Interest Litigation, one can assure justice to the aggrieved person and the society.