Lodging F.I.R. (First Information Report) is a legal right for every citizen, you can report to higher official in case of refusal in registering FIR. 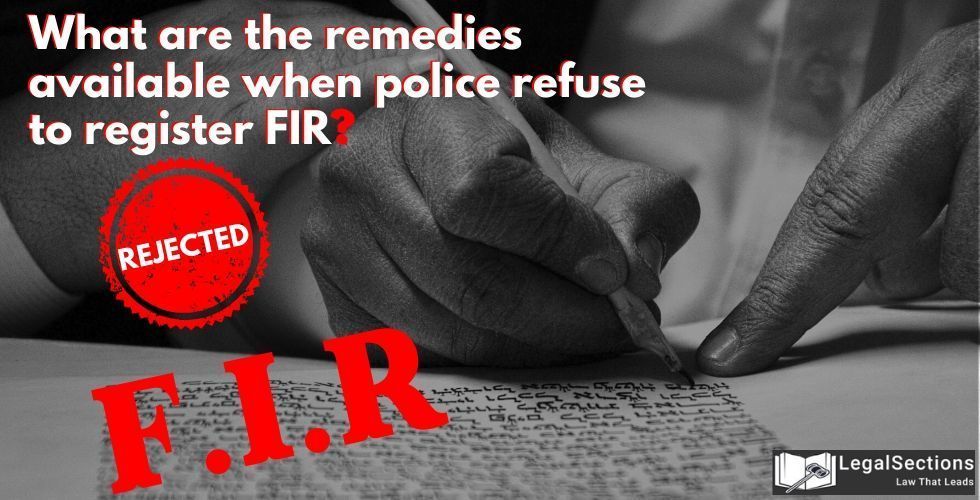 It is a common thing that police officers often refuse an F.I.R. registration. The Indian Legal System provides for many options that one can exercise in such cases, but it is pervasive that people don’t have the required information to use the same.

F.I.R. means a FIRST INFORMATION REPORT. It is generally a document in which all the information about the commission of a crime is recorded. Police Officers receive and record the information at the first point. Therefore, it is known as the First Information Report.

How important is an F.I.R.?

Until the aggrieved person or another person on his behalf informs about the occurrence of a crime to the police, no action is possible. It is the first step towards getting justice. The F.I.R. is the primary basis on which the information reaches the police, and only after registration of the F.I.R., an investigation can be started by the police.

Can the police refuse to file my complaint?

A police officer can refuse to file your complaint if he believes the case is of petty issue or also if they don’t have the territorial jurisdiction of such cases. Crimes can generally segregate into “cognizable” and “non-cognizable” offenses. F.I.R. is lodged only for cognizable crimes; for non-cognizable crimes, a complaint is submitted to the magistrate who, in return, directs the police for action.

A “cognizable” crime covers murder, rape, rioting, dacoity, etc., that is, crimes where arrest can be without a warrant & when such crimes are serious. A “non-cognizable” crime covers cheating, fraud, forgery, bigamy, selling underweight or contaminated food, or creating a public nuisance, that is, crimes, where arrest can not process without warrant & such crimes, are not of serious nature.

1) Superintendent of Police or Senior Officer
Write an application to the Superintendent of Police concerned, by post under clause 3 of Section 154 and Section 36 of the Cr.P.C., who, in case of a cognizable offense, can either investigate the case himself or direct any other police officer subordinate to him to investigate the incident. The said officer herein will have the same powers as an officer in charge of the police station concerning that case.

2) Magistrate
Approach the corresponding magistrate, who under the provision of clause 3 of Section 156 of the Criminal Procedure Code, 1973, or any second-class magistrate empowered by the chief judicial magistrate under clause 2 of Section 190 of the Cr.P.C., 1973 can check on the duties and actions performed by the police. The magistrate can take cognizance of an offense as are within his competence to inquire into or try when:
- They receive a complaint of facts which constitute such offense
- Upon a police report of such facts
- Upon information collected from any person other than a police officer
- Upon his knowledge, that such offense has been committed.
In case the magistrate finds that the police has not performed its duty at all, or has not done it satisfactorily, he can issue a direction to the police to take necessary action and can monitor the police. After the completion of the investigation, the police officer has to submit the charge sheet without delay. No action or investigation by such police officer can be questioned on the ground that he was not empowered to do so.

4) Writ petition
A person can also file a writ petition in high court under the provision of Section 482 of the Criminal Procedure Code, 1973.

Lallan Chaudhary v. State of Bihar
Supreme court held that the mandate of Section 154 is manifestly clear that if any information disclosing a cognizable offense is laid before an officer in charge of a police station, such police officer has no other option but to register the case on the basis of such information. The Supreme court bench also observed that genuineness or credibility of the information is not considered to be a condition precedent for registration of a case.

Lalita Kumari v. Govt. Of U.P.
In this case, the Supreme Court held that the registration of F.I.R. is mandatory under Section 154 of Cr.P.C. if the information discloses commission of a cognizable offense and no preliminary inquiry is permissible in such a situation.

Bhajanlal v. State of Haryana[6]
Supreme Court observed in this case that the legal mandate enshrined in Section 154(1) is that every information relating to the commission of a “cognizable offense” if given orally or in writing to “an officer in charge of a police station” (within the meaning of Section 2(o) of the Code) and signed by the informant should be entered in a book to be kept by such officer in such form as the State Government may prescribe which kind is commonly called as “First Information Report” and which act of entering the information in the said form is known as registration of a crime or a case.

- Every information relating to the commission of a cognizable offense, if given orally to an officer in charge of a police station, shall be reduced to writing by him or under his direction, and be read over to the informant. Every such information, whether given in writing or reduced to writing as aforesaid, shall be signed by the person giving it, and the substance thereof shall be entered in a book to be kept by such officer in such form as the State Government may prescribe in this behalf.

- A copy of the information as recorded under sub-section (1) shall be given immediately, free of cost, to the informant.

- Any person, aggrieved by a refusal on the part of an officer in charge of a police station to record the information referred to in sub-section (1) may send the substance of such information, in writing and by post, to the Superintendent of Police concerned who, if satisfied that such information discloses the commission of a cognizable offense, shall either investigate the case himself or direct an investigation to be made by any police officer subordinate to him, in the manner provided by this Code, and such officer shall have all the powers of an officer in charge of the police station about that offense.