PROSTITUTION IN INDIA: Is it legal?

In India, It is a misconception that prostitution is illegal, but it is legal. According to Human Rights Watch Report, there are over 20 million sex workers in India. 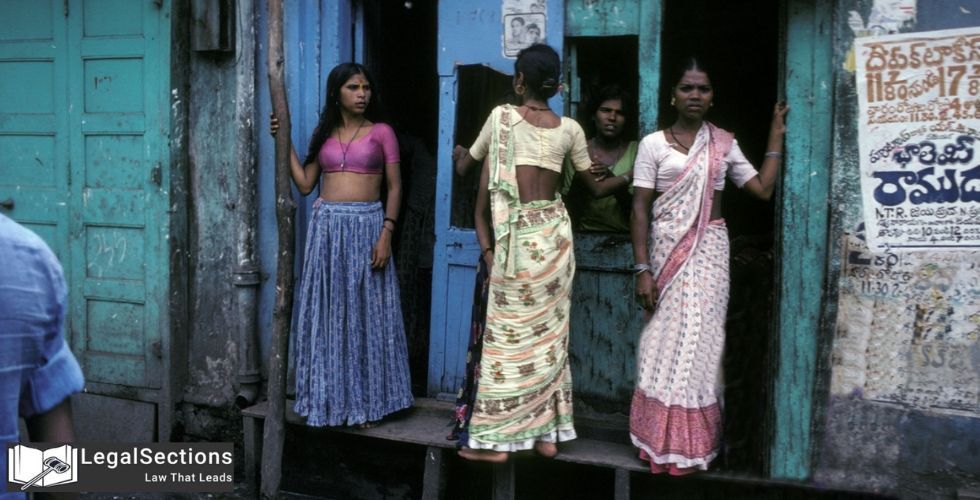 Prostitution in India is one of the oldest professions. Sex workers were also known as devadasi or tawaif earlier. This industry is not only driven by physical pleasure, but also driven by psychological and economic distress, which encourages many people in prostitution.

In India, It is a misconception that prostitution is illegal, but it is legal. According to Human Rights Watch Report, there are over 20 million sex workers in India. Many girls were kidnapped, tricked, or some girls pick prostitution as a profession to raise money to support their families.

Prostitution is an exchange of sexual pleasure for monetary benefits. In India, it is legal to practice prostitution, but other related activities are illegal such as –
- Soliciting prostitution at a public place
​​​​​​- Minor Prostitution
- Owing or managing a brothel
- Pimping & Pandering
- Carrying out prostitution in a hotel
- Kerb crawling

Presently many brothels are operating illegally in cities like Delhi, Kolkata, and Mumbai.

Multiple factors make women vulnerable to prostitution. One of such elements are women is treated as a commodity in India. Women who had sexual experience are regarded as characterless and are very likely not to get married.

Other causes of prostitution are-
- Financial cause
- Psychological cause
- Biological cause
- Religious cause
- Family and community-oriented prostitution
- Rape
- Failure to get married
- Lack of sex education
- Early marriage
- Kidnapping
- Sale by parents and husbands
- Debt
- Difficulty in getting a job
- Drug use etc.

Laws Around the World-

In this country, recently 3 main laws prohibiting the profession is struck down. It’s a win for sex workers who have been seeking safer working conditions.

This profession is not illegal in the United Kingdom. But acts related to it like Pandering, Escorting, Pimping, kerb-crawling, and soliciting are illegal.

In the U.S.A., prostitution and other activities related to it are considered illegal, and heavy penalties are applied. Nevada is the only place in this country where brothels are licensed and hence legal.

Laws Related to Prostitution in India

It was passed in 1956. It is also referred to as SITA. This law states that prostitutes are allowed to carry their business in private, but they cannot carry out their business in the open.
As per laws, clients can get arrested if they indulge in any sexual activity in public places. Exchange for sex is permissible in on a personal capacity. A lady cannot do it within a span of 200 yards of a public place.
Sex workers do not come under labor laws, but they have all the rights enjoyed by ordinary citizens and are entitled to be rescued and rehabilitated if they want to do so. Sections of the Indian Penal Code are used to bring charges of supposed criminal acts like public indecency against sex workers.
The problem is there is no clear definition of what these crimes constitute and sex workers left to the whims of officials who bring the charges against them.
SITA has recently changed to become PITA or The Immoral Traffic (Prevention) Act.

It was passed in 1986 and is an amendment in the SITA. As per this law, prostitutes will be arrested for soliciting their services or on seducing someone.
In this act, call girls are not allowed to make their phone number public. If they caught doing this, they could be imprisoned maximum for a period of 6 months along with financial penalties.
Clients who indulge in such activities within 200 yards of a designated area can be imprisoned for a maximum period of three months, and they need to pay fines for the same as well.
In case, if any major indulge in such activity with some minor, he or she can be jailed between 7 to 10 years.
Pimps and other people who live on income earned by prostitute are guilty as well. For this matter, if an adult man lives with a prostitute, he will be guilty and can face imprisonment between 2 to 4 years.
People who run businesses such as brothel keepers and landlords are liable to be prosecuted. In the case of the first offense, they will be imprisoned for a maximum of 3 years. In case, they forcibly keep any person in their brothel to be used as a prostitute or exploited for sexual forces. They can be imprisoned for a minimum of 7 years.
This law also prohibits prostitution in hotels. People involved in human trafficking are liable to be jailed between 3 to 7 years.
It is the legal responsibility of the government to rescue and rehabilitate such women.
A brothel is a place that is occupied by more than a couple of sex workers.

Is it Right to Legalize Prostitution in India?

Several women in India come in this profession due to financial problems. However, some of these women are forced into the business. The All India Network of sex workers President Bharti Dey states that people become prostitutes of their own accord, and they need to be given the same rights as other people.
In the last few years, it is seen that most new entrants women are from rural areas with a lack of education. For some of the casual labor with less payment is a way to go while for others, sex with higher pay is a much better option.

PITA serves to punish even the middlemen and brothel-owners involved in prostitution and reduce the blame on prostitutes. More open-minded and stringent laws need to be passed.
If prostitution is legally recognized as a valid occupation and sex workers as a regular wage worker, many shortcomings can be tackled. Prostitution need not be maintained. It needs to be regulated. Women are the sole owner of their bodies, so its upon them how to use it.
Due to the discrimination, many prostitutes have been denied access to necessary facilities like education, health care, and safety, etc. Everyone, regardless of sex, caste, creed, color, and profession, deserves to enjoy the fundamental human rights.