The Maternity Benefit Act, 1961 is a legislation that protects the employment of a woman at the time of her maternity. It entitles women employees of ‘maternity benefit’ which is fully paid wages during her absence from work and to take care of her child. 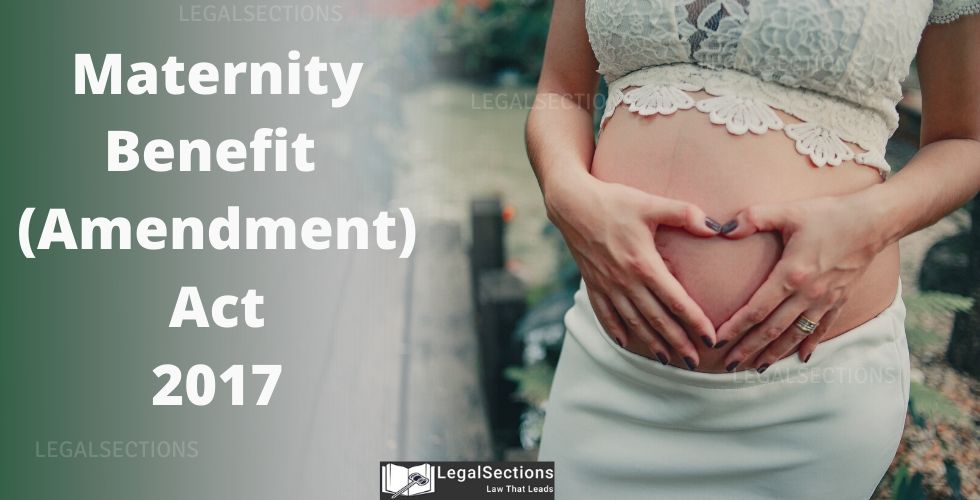 The Maternity Benefit Act, 1961 is a legislation that protects the employment of a woman at the time of her maternity. It entitles women employees of ‘maternity benefit’ which is fully paid wages during her absence from work and to take care of her child. This Act applies to the establishments employing ten or more than ten employees. The Maternity Benefit Act of 1961 has been amended through the Maternity (Amendment) Bill 2017, which was passed in the Lok Sabha on 9 March 2017. After that, the said Bill was passed in Rajya Sabha on 11 August 2016. Further, it received permission from the President of India on 27 March 2017. The provisions of the Maternity Benefit (Amendment) Act, 2017 came into effect on 1 April 2017, and the regulation concerning crèche facility (Section 111 A) came into force with effect from 1 July 2017.

Further, as per the provision of Section 2 of the Act, the State Government may subject to obtaining approval from the Union Government declared that the provisions of Act apply to any other establishment or class of establishments which are either carrying out industrial, commercial or agricultural activities or any other activity.

It may be noted that the provisions contained in this Act, save as otherwise provided in sections 5A and 5B shall not be attracted to any factory or other establishments to which the provisions of the Employee’s State Insurance Act, 1948, as per Section 2(2) of the Act. As per Section 26 of the Act, the appropriate Government has the power to exempt through a notification, an establishment from the ambit of the Act subject to the conditions laid down in Section 26 of the Act.

A woman must be working as an employee in an establishment for at least 80 days in the past 12 months to be entitled to maternity benefit under the provisions of the Maternity Benefit (Amendment) Act 2017.

Some of the amendments made in the Maternity Bill are -

Increased Paid Maternity Leave
The Maternity Bill Amendment (2017)Act has expanded the term of paid maternity leave accessible for ladies representatives from the current twelve weeks to twenty-six weeks. Under the Maternity Bill Amendment Act, this advantage could be benefited by ladies for a period stretching out up to 2 months previously the reasonable conveyance date and remaining eighteen weeks can be profited post-labour. For ladies who are expecting after having two kids, the span of paid maternity leave might be twelve weeks which means a month and a half pre and a month and a half post expected date of delivery.

Maternity leave for receptive and dispatching moms
The Maternity Bill Amendment(2017) Act stretches out specific advantages to assenting mothers also and gives that each lady who receives a kid should be qualified for twelve weeks of maternity leave from the date of selection.

No expanded advantage for a third child
The expanded Maternity Benefit is accessible for the initial two kids. The Amendment gives that a lady having at least two surviving youngsters should be qualified for twelve weeks of Maternity Benefit of which not more than six might be taken preceding the date of the standard conveyance.

Adoption/Surrogacy
A lady who embraces a youngster underneath the age of three months, or a dispatching mother which implies a natural mother who utilizes her egg to make a developing life embedded in some other lady will be qualified for Maternity Benefit for a time of twelve weeks from the date the kid is given over to the receiving mother or the authorizing mother.

Work from Home option
The Maternity Benefit (2017) Amendment Act has likewise acquainted an empowering arrangement relating to work from home option for ladies, which might be practised after the expiry of the twenty-six weeks leave period. Contingent on the idea of work, female representatives, might have the capacity to profit this advantage on terms that are commonly concurred with the business.

Creche option
The Maternity Bill Amendment(2017) Act makes creche office obligatory for each foundation utilizing at least fifty representatives which means that every foundation having fifty or more representatives are required to have an obligatory creche, either independently or alongside other regular offices. The mother is likewise to be permitted four visits a day to the creche, which will incorporate the interim for rest permitted to her.

The 2017 amendment in the act has raised the maternity benefits from 12 weeks to 26 weeks. This is significant and is in line with the recommendation of the World Health Organisation(WHO), which says that the mother must exclusively breastfeed children for the first twenty-four weeks. The extension in maternity leave will help in improving the survival rates of children and the healthy development of both mother and child.

This will also deduct the instances of women dropping out of the labor force due to the absence of adequate maternity leave. The 2017 amended act also lies in line with international best practices such as the Maternity Protection Convention of 2000 (No 183), which needs for at least 14 weeks of mandatory maternity benefit.

Another significant feature is the introduction of twelve weeks of maternity benefits to adopting and commissioning mothers. The amended provisions have queued India 3rd worldwide only behind Canada and Norway globally in the number of maternity benefits being made available to the female workers.

Furthermore, the justification for having separate effective date for implementing “work from home” option is not clear, for the reason that works from home is an enabling provision brought into force to inspire employers to provide such choice to woman workers depending upon the nature of work being handled by her and not a statutory requirement under the Maternity Benefit (2017)Amendment Act. Creche facilities require more capital and operating expenditure on the part of the employer. The establishments will have to bear the entire cost of providing leave to female employees. In other countries, the cost of maternity leave is shared by the government, employer, insurance agency and other social security programs.