How to File for Divorce: Step by Step Divorce Procedure

Divorce is the legal termination of a marital relationship. Earlier, the concept of divorce is not present in Hindu law as marriage is a sacred tie and last of ten sacraments that can never be broken. 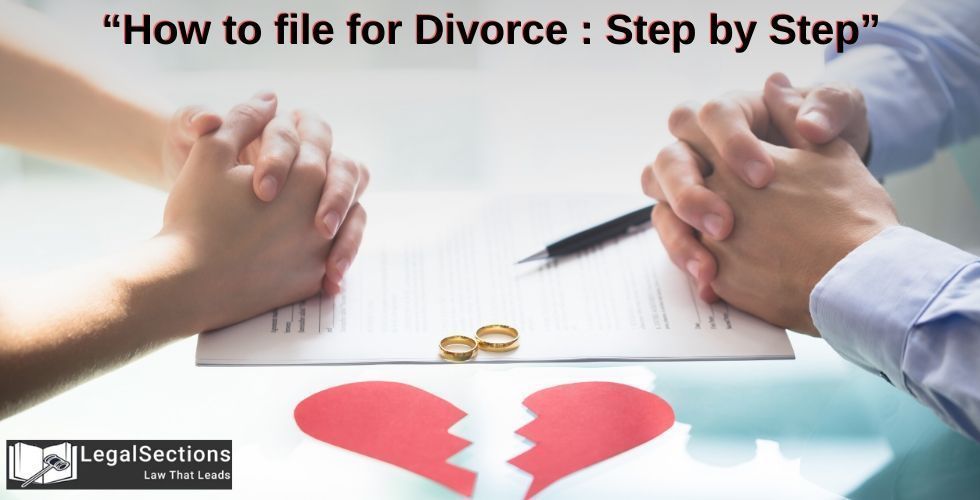 Divorce is the legal termination of a marital relationship. This article discusses divorce under Hindu Law. Earlier, the concept of divorce is not present in Hindu law as marriage is a sacred tie and last of ten sacraments that can never be broken. As time passes, marital trouble and financial issues raise, divorce was introduced in the Hindu Marriage Act, 1955. Hindu Marriage Act,1955 govern the Hindus, Buddhists, Sikhs and Jains.

The Indian Divorce Procedure is broadly classified into two categories –

How to file for Mutual Consent Divorce?

1. Filing of the Petition-

A joint petition for termination of marriage for a decree of divorce may be presented to the family court by both the spouses. This petition will be signed by both parties.

2. Appearing Before Court and Scrutiny of Petition –

Both the parties will have to appear before the court after filing of the petition. The court will scrutinize the petition along with all the documents filed. Documents include –
a) Address proof of both spouses

b) Professional and financial details

h) Pieces of evidence that shows failed attempts to reconcile

3. Passing of Orders for the Recording of Statements

After a petition is scrutinized, parties statements will be recorded on oath.

4. Order on First Motion and Passing of 6 months Period Before Six Months

The court passes a decree on first motion, 6 months is given to both the parties to divorce before they can file the second motion. The maximum period for filing the second motion is 18 months.

5. Second Motion and Final Hearing of the Matter

6 months period given to the parties can be waved off at the discretion of the court if the court feels it will only increase their sufferings. If the second motion is not made between the period of 18 months, the court will not pass any decree for divorce.

If the court is satisfied after hearing the parties that the allegations in the petition are true and reconciliation is not possible, the court can pass a decree of divorce.

How to File for Contested Divorce?

A contested divorce can be filed based on various grounds mentioned in the Hindu Marriage Act,1955.

1. Filing of the Petition

A single party is required to sign the petition and filed before the appropriate family court, depending upon the jurisdiction.

2. Scrutiny of the Petition

The court would scrutinize the petition on the first hearing.

3. The Appearance of the Opposite Side Party

A copy of the petition and notice is served to the party and on the next date of hearing he would have to appear in the court.

The court will try to resolve the matter and may also direct the parties to appear for mediation.

In case mediation is not successful. The court would continue the divorce proceedings.

5. Recording of Evidence and Final Arguments

Both the parties would be required to submit evidence and get cross-examined.

After this final argument from both, the sides are presented before the court.

6. The Final Decision is Given by the Court

If the court is satisfied, it will provide a decree of divorce. If either party is dissatisfied with the decision, they can file an appeal within three months from the date of the order.

Section 13 of the Hindu Marriage Act,1955 contains grounds for divorce.

Section 13(1) contains grounds on which either of the parties can file divorce. It includes-

(i) Has, after the solemnization of the marriage had voluntary sexual intercourse with any person other than his or her spouse; or

(ii) has, after the solemnization of the wedding, treated the petitioner with cruelty; or

(iii) has deserted the petitioner for a continuous period of not less than two years immediately preceding the presentation of the petition; or

(iv) Has ceased to be a Hindu by conversion to another religion; or

(v) Has been incurable of unsound mind, or has suffering continuously or intermittently from mental disorder of such a kind and to such an extent that the petitioner cannot reasonably be expected to live with the respondent.

(vi) has been suffering from a virulent and incurable form of leprosy; or

(vii) has been suffering from venereal disease in a communicable form; or

(viii) has renounced the world by entering any religious order; or

(ix) has not been heard of as being alive for a period of seven years or more by those persons who would naturally have heard of it, had that party been alive.

(i) that the husband has, since the solemnization of the marriage, been guilty of rape, sodomy or bestiality; or

(ii) that her marriage (whether consummated or not) was solemnized before she attained the age of fifteen years and she has repudiated the marriage after reaching that age but before reaching the age of eighteen years.

Section 13(2) also has more grounds other than the grounds mentioned above.

1. Amardeep Singh v. Harveen Kaur
In this case, Supreme court held that the cooling-off period of 6-18 months provided under Section 13 B(2) of the Hindu Marriage Act, 1955 is not mandatory, but a directory provision and can be waved off under certain circumstances.

2. Swapna Ghose v. Sadanand Ghose
In this case, the wife found her husband with another girl lying on the same bed, and the neighbour also confirmed that the husband had committed an offence. Here the ground for divorce is valid, and wife gets the divorce.

Most Important Factors in Divorce

1. Alimony – Husband or wife whoever is incapable of supporting himself or herself is entitled to get financial help from another party.

2. Custody of Child – In case of divorce with mutual consent, the matter of custody of the child is amicably sorted but in case of contested divorce parenting ability is of both parties is examined by the court.

3. Settlement of Property- At the time of divorce, the estate gets settled according to the ownership of the Spouses.