How to File a Cheque Bounce Case?

Cheque bounce is a non-cognizable & bailable offence under Section138 of the Negotiable Instruments Act imposing criminal liability on the drawer of cheque. 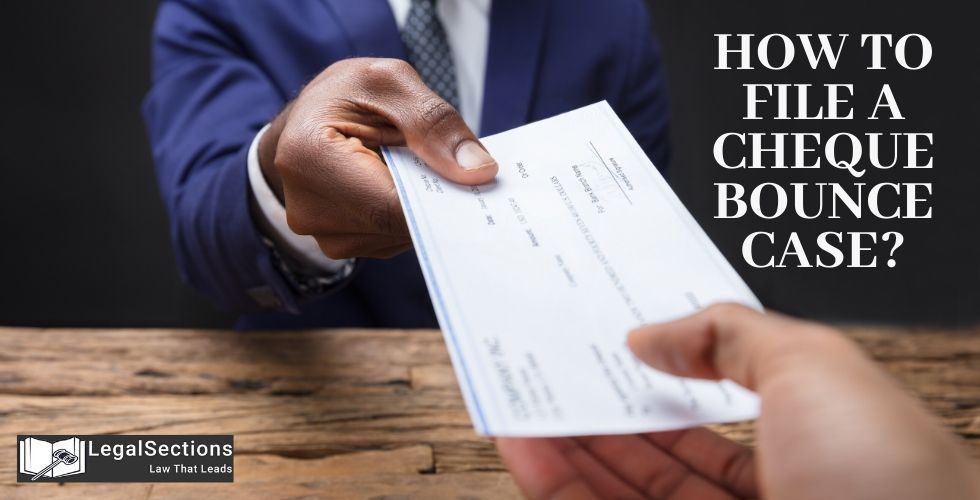 It is an excellent thrill for me, absolutely marvellous. Now I am going to give you a cheque, and it won’t bounce. – Don Wright. The reason for cheque bounce or dishonour, which is seen in this line is the insufficiency of funds in the bank account, one of the reasons mentioned in section 138 of the Negotiable Instruments Act, 1881.

According to section 6 of Negotiable Instrument Act, a cheque is a bill of exchange drawn on a specified banker and not expressly payable otherwise than on-demand, and it includes the electronic image of a truncated cheque and a cheque in electronic form. In simple words, A cheque is a document that orders the bank to pay a specific sum of money from the drawer's account to the payee's account. The drawer is the person who draws the cheque and payee is the person on whose name it is drawn.

What is Dishonour of Cheque or Bouncing of Cheque?

According to section 138 of the Negotiable Instruments Act , where any cheque drawn by a person on an account maintained by him with a banker for payment of any amount of money to another person from out of that account for the discharge, in whole or in part,of any debt or other liability , is returned by the bank unpaid, either because of the amount of money standing to the credit of the account is insufficient to honour the cheque or that it exceeds the amount arranged to be paid from that account by an agreement made with the bank, such person shall be deemed to have committed an offence of dishonour of cheque.

In simple words, cheque drawn by drawer returned unpaid by the bank due to any reason, i.e. insufficiency of funds, signature mismatch etc. is called dishonour of cheque.

Section 138 of the Negotiable Instruments Act is the only section in the act which imposes criminal liability on the drawer of the cheque, in case of non-payment.

Dishonour of cheque is a non-cognizable and bailable offence.

In section 138, two reasons are mentioned - insufficiency of funds and amount written on the cheque exceeds the amount arranged to be paid by an agreement made between drawer and bank. But the use of word etc. in the section clearly shows that there can be many reasons like -

1) Signature mismatch or signature is not present

2) Presented after a lapse of the period

3) Overwriting in the cheque

5) Insolvency, insanity, death of the drawer.

6) The date is not mentioned or written incorrectly

1. The cheque must be presented before the lapse of time- cheque must have been presented to the bank within three months or within the period of its validity, whichever is earlier.

2. Sending a demand notice – Payee has to sent demand notice to the drawer within 30 days from the date, the cheque is returned unpaid by the bank. The purpose of this notice is to demand payment and informing the drawer that he/she will be prosecuted in case of non- payment.

Steps after dishonour of cheque

1. Filing Complaint- According to section 142 of Negotiable Instruments Act 1881, a complaint must be in writing made by the payee, and it should be within one month from the date of the refusal of payment by drawer or he didn’t reply, within 15 days after receiving demand notice.

For filing complaint, a complainant is required to pay court fees which vary depending upon the amount of cheque, and it also differs from state to state. Essential documents required for filing the complaint are original cheque, memo of returning the cheque, a blueprint of notice of demand and affidavit stating the pieces of evidence.

2. Court Notice to Accused- After filing a complaint, the court will issue summons to the accused who owes the money to the complainant.

3. Punishment and Penalty- If accused is found guilty then according to section 138 of Negotiable Instruments Act, he shall be punished with imprisonment for a term which may be extended to 2 years or with fine which may extend to twice the amount of cheque or with both.

If the offence under section 138 of the Negotiable Instruments Act,1881 has been committed by a company then along with a company which is separate legal entity every single individual who was present at the time of commitment of offence will be responsible and is guilty of an offence unless he proves his innocence.

1) The presumption in favour of the holder under section 139 that the cheque is drawn on some debt or liability is rebuttable.

2) It shall not be a defence in a prosecution for an offence under section 138 that the drawer had no reason to believe when he issued the cheque that the cheque may be dishonoured on presentment according to section 140 of Negotiable Instruments Act, 1881.

Landmark Cases of Dishonour of Cheque

Plaintiff filed a case for the dishonour of cheque, but after three days of filing, the case defendant managed the amount and requested plaintiff to drop the case. In this case, it was held that after filing a lawsuit if the defendant wants to pay then the plaintiff can drop the case because dishonour of cheque is a compoundable offence as mentioned in section 147 of Negotiable Instruments Act,1881.

This case gave the list of all necessary ingredients like cheque must be presented in the bank before the lapse of time, the presumption of the existence of a debt in favour of payee or holder of the cheque and the reasons for the dishonour of cheque.

In this era, transactions in cheques are preferable and convenient, especially when the amount is large because it finishes the requirement to carry cash. As transactions in cheques are increasing, the practise of the cheque bounce is also growing. To reduce this practice, there has been the enactment of the Negotiable Instruments Act. Section 138 of the Negotiable Instruments Act 1881 provides both punishment and penalty in case of bouncing of cheque, due to which this practice has been reduced up to a certain extent.

This article about cheque bounce clarify many facts but in case if you have confusions or legal issues related to cheque bounce, Get in touch with the legal team now for expert advice.