Claim Rights of Daughter in Property

Property laws also include the Hindu Succession Act, 1956, which is amended in 2005. Now daughters also have an equal right in her father’s property. 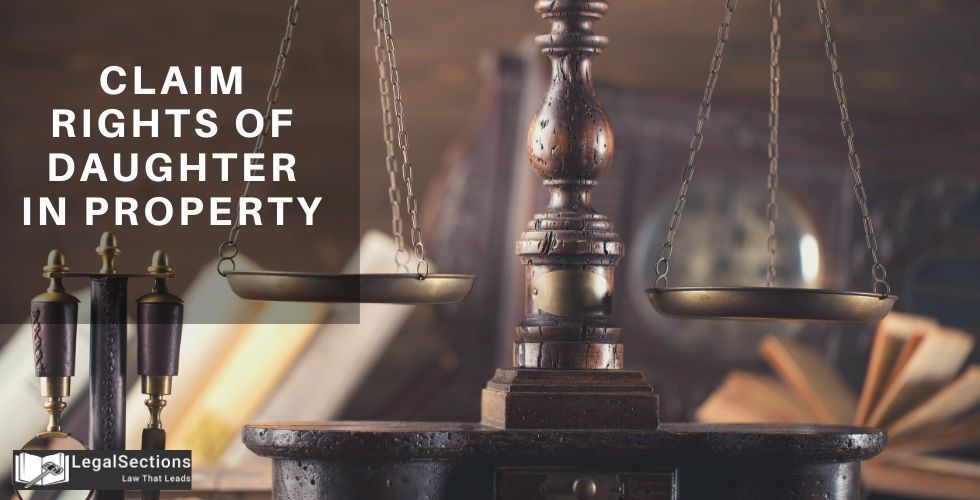 Property Law is the area of law that governs what people own. Property laws continue to grow and change from time to time.

Property laws also include the Hindu Succession Act, 1956, which is amended in 2005. Now daughters also have an equal right in her father’s property.

Daughters have the same right, duties, and liabilities that were earlier only limited to the sons.

Daughters also obtained the right to be appointed as Karta to her father’s Hindu Undivided Family property.

When Daughters can Claim Her Father’s Property and When She Can’t Claim?

1. If the Property is Ancestral

Ancestral property is the property inherited up to 4 generations of male lineage and should have remained undivided throughout this period. By birth, the daughter has a share in ancestral property, and the father cannot deprive his daughter of her share.

2. If the Property is Self-Acquired

Self-acquired property is the property brought by her father with his own money. In this, the father can deprive his daughter of her share by making a will or by giving his property as a gift to anyone he wants.

3. If the Daughter is Married

The daughter is recognized as coparcener, and her marital status makes no difference to her right to claim her father’s property.

4. If a Father Dies Without Leaving a Will

5. If a Daughter Born or Father Died Before 9 September 2005

The Difference in Property Rights of Daughter According to Religion

A. Daughters have equal rights of inheritance as sons to their father’s property.

B. Section 6 of Hindu Succession Act, 2005 states in a Joint Hindu family governed by the Mitakshara law, the daughter of a coparcener shall,―

C. By birth become a coparcener in her own right the same manner as the son.

D. Have the same rights in the coparcenary property as she would have had if she had been a son.

E. Be subject to the same liabilities in respect of the said coparcenary property as that of a son, and any reference to a Hindu Mitakshara coparcener shall be deemed to include a reference to a daughter of a coparcener.

Daughters have rights of residence in parents' houses as well as the right to maintenance until they are married. In case of divorce, charge for maintenance reverts back to the parental family after the iddat period ( approximately three months). In case she has children capable of supporting her, the charge falls upon her children.

These changes were brought to remove gender discrimination as provisions of the Hindu Succession Act, 1956, were infringing Right to Equality, which is given under Article 14 and 15 of the Indian Constitution.

1) Porchuri Sambasiva v. Porchari Srinivasa Rao
It was held in the case that the daughters become coparcener after the Hindu Succession Act, 2005. The right of a daughter as a coparcener in family property arises only after Amendment in 2005

2) Danamma v. Amar
In 2002, two daughters of Mr. Gurulingappa Savadi was died intestate petition to the court to enforce their inheritance right pursuant to the provisions of the Hindu Succession Act, 2005. The trial court and subsequently the High Court sitting in Karnataka dismissed the case relying on the fact that their birth and the suit pre-dated the Hindu Succession Act,2005. The petitioners dissatisfied with the decision approached the Supreme Court of India by civil appeal.

The question of law which was put forward before the Supreme Court was to determine “ Whether by being born before 2005, the appellants are disentitle to a share in their deceased father’s state contrary to the dictates of Hindu Succession Act of 2005 as amended?” and the appellants asked in Supreme Court “whether or not they are coparceners by virtue of the provisions of section 6 amended in 2005?”

It was held in the case that daughters are entitled to ancestral property, and this right cannot be derogated upon because the daughter is born before the 2005 amendment. The court further held that the amendment of 2005 applies retrospectively hence applicable to all suits bothering on partition and distribution of estates filed and pending as at 2005.

India is a male-dominated society, so its effect can be seen on various laws and one of these laws is the Hindu Succession Act 1956, where all the rights to claim one father’s property was given to sons. Still, after its amendment in 2005, both daughters and sons have equal rights to claim the father’s property. It is an attempt to remove gender discrimination, which is still pertaining to Indian Society and to uphold the position of women in India.